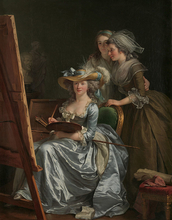 In forging a successful career as a portraitist, Adélaïde Labille-Guiard had to overcome an unwelcoming male-dominated art world. Labille-Guiard was often described as a bitter rival of the best-known woman painter of the time, Elisabeth Louise Vigée-Le Brun, but this rivalry was in fact the invention of male artists and critics threatened by their female competitors. After Labille-Guiard's Salon debut in 1783, a slanderous pamphlet accused her of ethical and sexual improprieties. Despite this adversity, Labille-Guiard was an active promoter of rights for women artists and a successful teacher.

The youngest child of a Parisian merchant, Labille-Guiard trained with her childhood friend, François-André Vincent. She made her own studio in the early 1780s and established royal and aristocratic patrons for her pastels, oil paintings, and miniatures. By 1783, she had taken on teaching nine women students; also in 1783, Labille-Guiard was admitted to full membership of the Académie Royale and she exhibited portraits at the Salon until 1800.

Many of Labille-Guiard's works were half-length portraits with little or no elaboration of setting. Using a restrained, sombre palette, she captured her sitters in relatively informal, candid poses. In the wake of the French Revolution, her clientele dried up, but Labille-Guiard adapted and found new sitters among the Revolutionary leaders including Maximilen de Robespierre. After several of her paintings were destroyed by official decree, she was forced to flee Paris but did eventually return.
more >
4