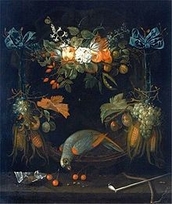 Abraham Mignon (1640-1679)
Born in 1640 in Frankfurt, this still life painter was originally apprenticed at the age of nine to the artist Jacob Marrell, who took his pupil with him when he moved from Germany to the Netherlands in 1664. From 1669 both artists are recorded as members of Utrecht’s St Luke's Guild. Here Mignon studied under the still-life specialist Jan Davidsz. de Heem and worked as his assistant until 1672. Mignon's paintings of flowers and fruit feature the same opulent style of composition and the same brilliant colours as De Heem's work. Mignon's paintings were popular at court, the Elector of Saxony and the French king Louis XIV both bought work by Mignon. Abraham Mignon continued to live in Utrecht, until his death in 1679.