Jacques Louis David: The Robespierre of the brush

Jacques Louis David (30 August 1748 – 29 December 1825) is one of the most famous French neoclassic painters and perhaps the most important one. Alongside his astounding work, he was a leading member of the Jacobins (the revolutionary political movement of the French Revolution) and closely connected to Napoléon Bonaparte who appointed him First Painter to the Imperial Court. His compositions, often of enormous size, replaced the Rococo style in France, conveyed the political ideas of the French Revolution and depicted important moments of the Napoleonic Empire.

Neoclassical artists used the forms and themes of antiquity in order to provide artistic substance to new ideas about the world. Following the principles of the Enlightenment and as a reaction to the luscious, ornate, carefree and playful Rococo, they turned to the pure art form of ancient time in order to set social values and pave the way to the French Revolution. In this context, David painted some of the most recognizable and important paintings of his time; the Oath of the Horatii, the Death of Socrates, the Sabines, The Death of Marat, the Distribution of the Eagles, are some of his works that through the masteful presentation of heroic moments and scenes of martyrdom, are openly didactic and moralizing. 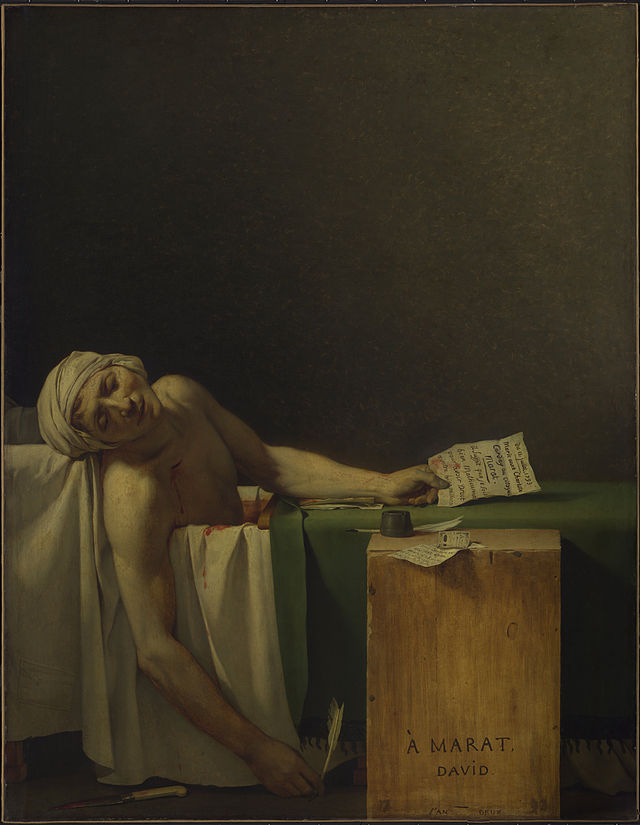 The Death of Marat is the painting that best represents David’s inspiration by the events of the French Revolution. Jean-Paul Marat, one of the leaders of the French Revolution and David’s friend, was murdered in his bathtub by Marie-Anne Charlotte de Corday d’ Armont. The simple and minimalistic composition, as well as the fact that Marat’s body posture and illuminated head remind scenes from the Deposition from the Cross and the Entombment of Christ, render Marat martyr of the Revolution. The painting focuses on the victim and carefully presents details of the murder; the board on which Marat used to write, the knife and the note by Charlotte Corday. Triggered by emotion, Neoclassicism is transformed into tragic realism.

The Consecration of the Emperor Napoléon and the Coronation of Empress Joséphine is a huge canvas (610x913cm) inspired by Rubens’ Coronation of Marie de Medici. It presents Napoléon’s coronation ceremony held on December 2 of 1804 at Notre-Dame Cathedral in Paris in presence of the Pope. It is said that, in reality, Napoléon had crowned himself facing the congregation in order to symbolize independence from the Church and then crowned the kneeling Joséphine. However, David opted to present the Emperor crowning the Empress as a sign of nobility and further downsized the structure of the Cathedral to emphasize the figures. The complex composition is organized around several axes and centered to Napoléon with all eyes turned to him. 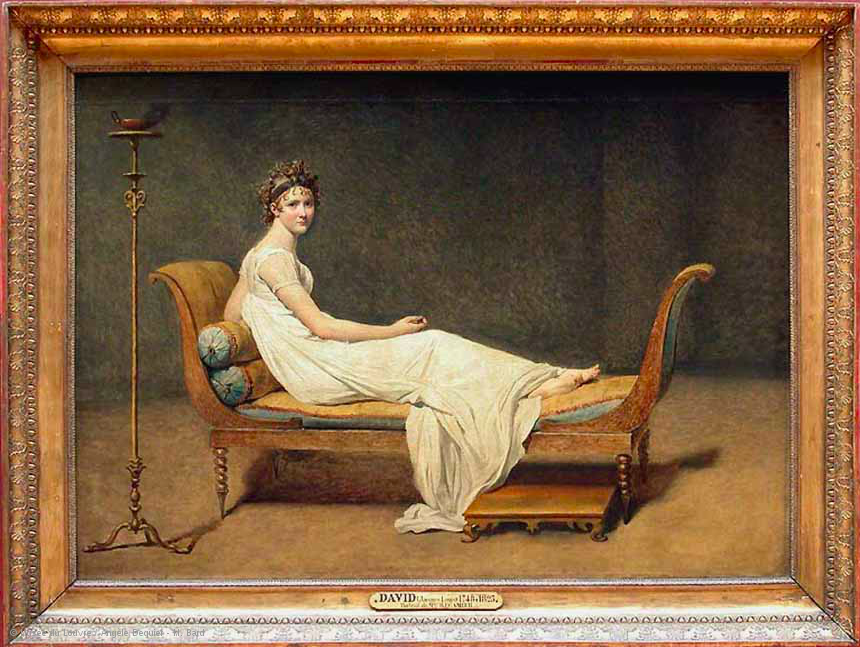 As opposed to David’s sophisticated mythological and historical compositions abounding with heroic scenes and monumental characters, his portraits of contemporary “bourgeois” manage to capture a psychological side while standing out for their elegance and grace. Persons are usually depicted in natural poses, less rigid and grave than in portraits of the pre-revolutionary period. Among David’s excellent portraits (although unfinished) is that of Madame Jeanne-Françoise Julie Adélaïde Récamier, known as Juliette Récamier. The lady's pose, clothing and hair style, as well as the fact that she is barefoot, are evidently influenced by the neoclassical ideal. Following the first exhibition of the painting, the type of sofa on which Madame Récamier lays was named after her.

During the last period of his life and after Napoléon’s fall, David was exiled in Brussels where he passed the last ten years of his life. Until his death in 1825, he painted less vigorously, deprived from the social and political action which was for the most part of his life the source of his inspiration. The Three Women from Ghent (the portrait of Madame De Tangry and her daughters), is considered one of his last paintings carrying his apocryphal signature. With the help of his Belgian student François-Joseph Navez, perfection is achieved and the greatness of his talent is once again present.