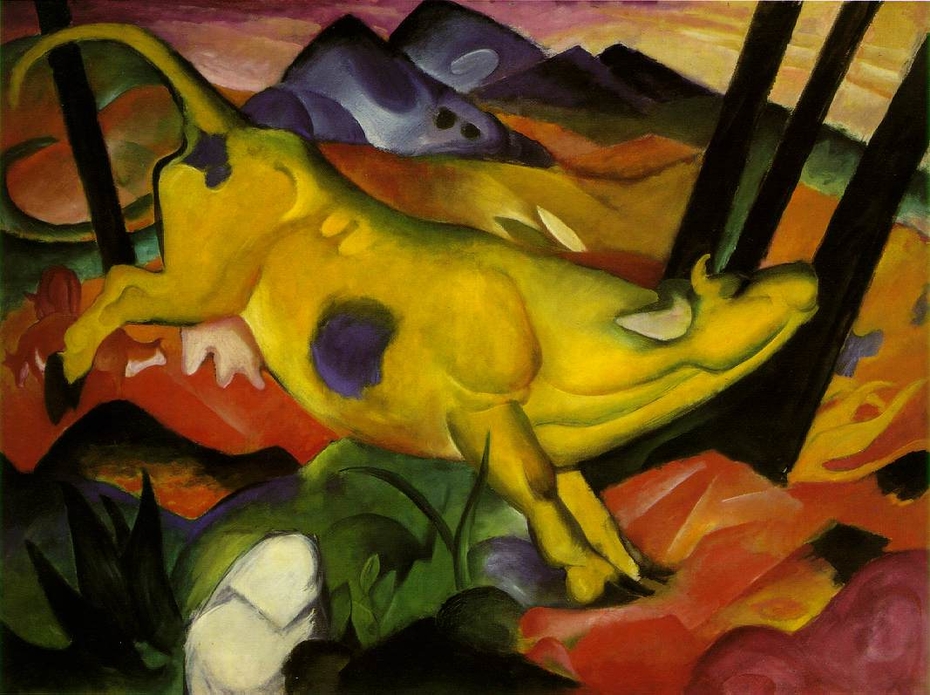 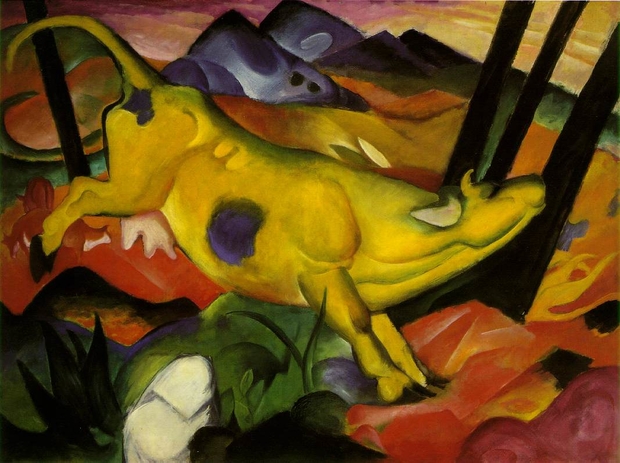 During the early years of the twentieth century, a back-to-nature movement swept Germany. Artists’ collectives and nudist colonies sprung up in agricultural areas in the conviction that a return to the land would rejuvenate what was perceived to be an increasingly secularized, materialistic society. A seminarian and philosophy student turned artist, Franz Marc found this nature-oriented quest for spiritual redemption inspiring. His vision of nature was pantheistic; he believed that animals possessed a certain godliness that men had long since lost. “People with their lack of piety, especially men, never touched my true feelings,” he wrote in 1915. “But animals with their virginal sense of life awakened all that was good in me.” By 1907 he devoted himself almost exclusively to the representation of animals in nature. To complement this imagery, through which he expressed his spiritual ideals, Marc developed a theory of color Symbolism. His efforts to evoke metaphysical realms through specific color combinations and contrasts were similar to those of Vasily Kandinsky, with whom, in 1911, he founded the Blue Rider, a loose confederation of artists devoted to the expression of inner states.

For Marc, different hues evoked gender stereotypes: yellow, a “gentle, cheerful and sensual” color, symbolized femininity, while blue, representing the “spiritual and intellectual,” symbolized masculinity. Marc’s color theories and biography have been used by art historian Mark Rosenthal to interpret Yellow Cow. The frolicking yellow cow, as a symbol of the female principle, may be a veiled depiction of Maria Franck, whom Marc married in 1911. Extending this reading, Rosenthal sees the triangular blue mountains in the background as Marc’s abstract self-portrait, thereby making this painting into a private wedding picture. Not all of Marc’s paintings of animals are so sanguine, however. He often depicted innocent creatures in ominous scenes. Painted in 1913, The Unfortunate Land of Tyrol reflects the desolation caused by the Balkan Wars and their anticipation of pan-European battle; an Austro-Hungarian border sign included in the lower-left portion of the canvas indicates the vulnerability of this province. The cemetery and emaciated horses portend doom, but Marc’s faith in the ultimate goodness of nature and the regenerative potential of war prevails: the rainbow and bird with outstretched wings reflect a promise of redemption through struggle.