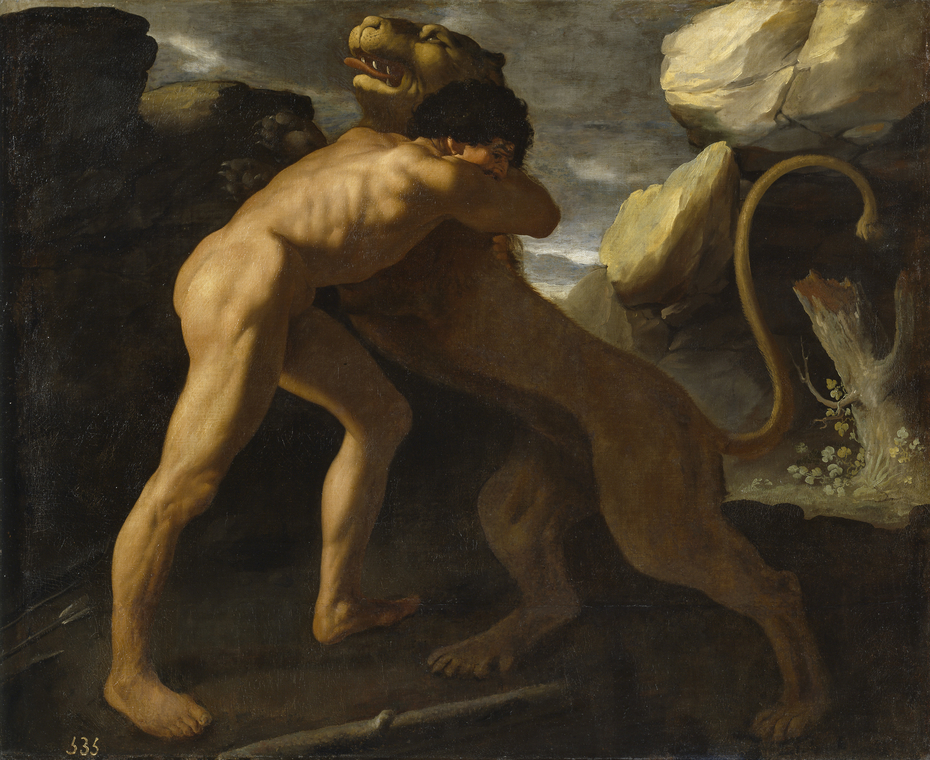 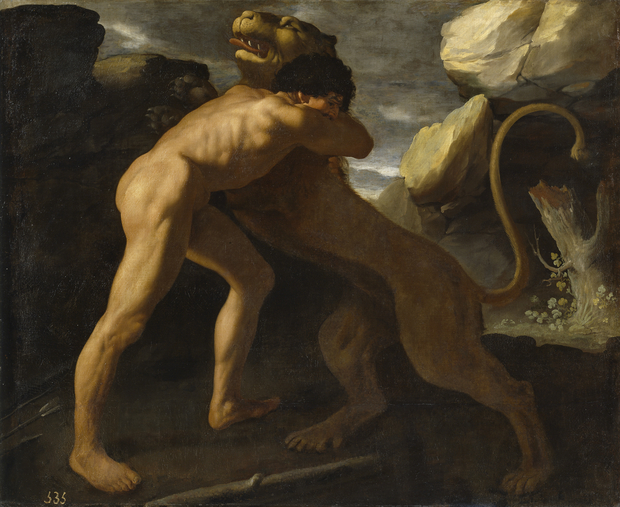 1634
A lion was ravishing the region of Nemea and frightening its inhabitants to such a degree that they could no longer work the land. The Marquis of Villena’s Twelve Labors of Hercules, along with Juan Pérez de Moya’s Secret Philosophy (1585) and Baltasar de Victoria’s Theater of the Gods of the Pagan World (1620-1624), were almost certainly the reference texts for the conception of the Labors of Hercules series for the Hall of Realms. Villena set this scene in the rough, stony surroundings that had become the lion’s refuge, as is reflected in the print that accompanies his narrative. Zurbarán gave his landscape the same appearance, unlike other engravings often proposed as his main compositional references. These include Cornelis Cort’s (1533-1578) series on the same subject, which is based on drawings by Frans Floris and others that Hans Sebald Beham created in the 1540s. For the present work, Zurbarán follows Cort’s print in his placement of the hero, and Beham’s in his conception and location of the lion, who is upright when Hercules attacks and strangles him with his arms after first employing the garrote that appears on the ground in the foreground of Zurbarán’s painting. In his narration of this moment, Villena emphasizes the animal’s fierceness. In this painting, the animal’s head is the element that crowns the pyramidal composition formed by the two intertwined figures, although Hercules’s is partially hidden by his right forearm. The scene’s dramatic force is further emphasized by the evening light that bathes Hercules’s body, bringing out his powerful musculature and his effort. This use of light is repeated throughout the series to focus the viewer’s attention on the hero with whom Philip IV identified as legitimate successor to the Habsburgs and to the Spanish throne. As with other stories of Hercules vanquishing a monster or a fabled animal after a difficult struggle, his triumph over the Nemean lion symbolizes the hero’s valor, and thus, that of the king and the monarchy. It also represents the triumph of virtue over evil and discord. In this specific episode, the Marquis of Villena views the Nemean lion as a representation of hubris and vice. By killing and skinning him, Hercules brought virtue and peace to the states. And after killing him, Hercules wore his pelt, which became one of his characteristic attributes and is also considered a protective element.