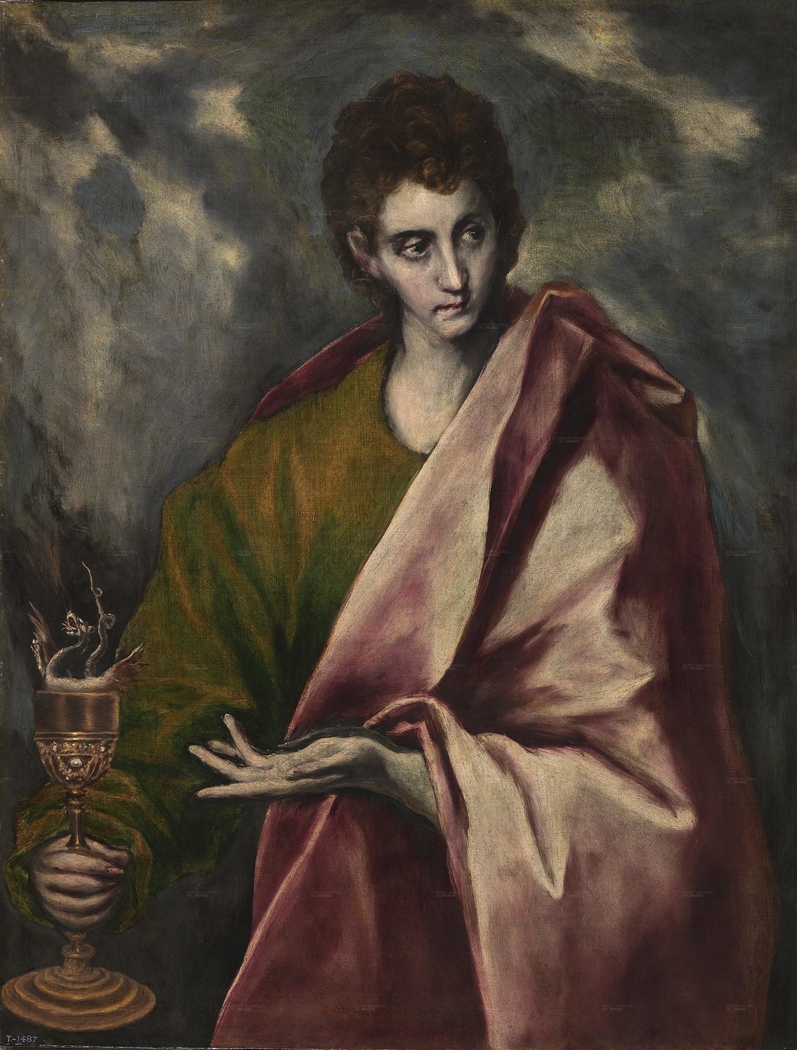 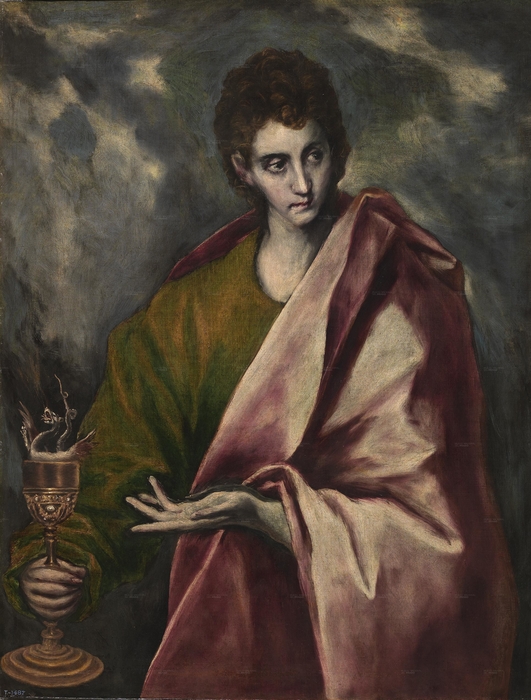 1605
Series of paintings representing the twelve Apostles, sometimes known as apostolados, were a common sub-genre in the religious painting of the Spanish Siglo de Oro. Such images could be part of altarpieces, and were also often used to decorate the walls of monasteries, convents, and private homes. This painting shows St. John the Evangelist, the author of the last of the four Gospels and the book of Revelation. The portraits of the apostles painted by El Greco fall into two groups: The first includes a large number of relatively small canvases that follow visual formulas similar to the Prado´s St. John the Evangelist, while the second is comprised of other examples depicting the saints full-length and in twos. The half-figure paintings have clear precedents in the Venetian school, but El Greco’s unique personal style naturally comes to the foreground even when he follows traditional schemas. Lit by an otherworldly, silvery light, the saint stands gracefully poised against a background of stormy clouds that in some places seem to form a strange halo around him. The figure, artificially elongated to the point of almost complete implausibility, seems animated by the rhythmic pulsation of light and shadow. These typical features of El Greco’s style respond to his artistic ideal, which sought to reconcile Florentine disegno and Venetian colorito. While the style of the Florentine and Roman Mannerists prioritized drawing, line, and shape and often produced cold, artificial-looking, archly elegant pictures, their Venetian counterparts preferred a less intellectual, more sensual approach based on the use of rich, vibrant colors applied with a complex layered technique. El Greco’s firsthand knowledge of both schools of painting, gained during the years he spent in Italy -a defining moment in the development of his artistic persona- is evidenced in this painting.
In Christian iconography, saints were traditionally portrayed with objects associated with the saint’s life or legend, to ensure that the saint would be recognizable to the viewer; these objects were called the saint’s attributes. Here, El Greco presents Saint John with one such attribute: a cup, here taking the shape of an ornate golden chalice of a type that was usual during El Greco’s lifetime. The little winged serpent that writhes inside it alludes to an episode in Jacobus de Voragine’s Legenda Aurea, a medieval compilation of saints’ lives, according to which John had to prove the truth of his preaching by drinking from a poisoned cup without dying. In this example, the saint directs his gaze at some point outside the painting while his slender left hand gesticulates as if inviting someone to look at the chalice he holds in his right; the fact that we do not see his interlocutor gives the painting an intriguing air. Another version of this painting exists in a private collection, although in its present state that painting does not show the saint’s right hand and the chalice and the saint is depicted against a plain, dark background. The existence of similar paintings and the recycled motifs bear witness to the workshop practice in El Greco’s atelier, with which the artist attempted to satisfy the demand for his works (Pérez d´Ors, P.: El Greco to Goya. Masterpieces from the Prado Museum, Museo de Arte de Ponce, 2012, p. 114).