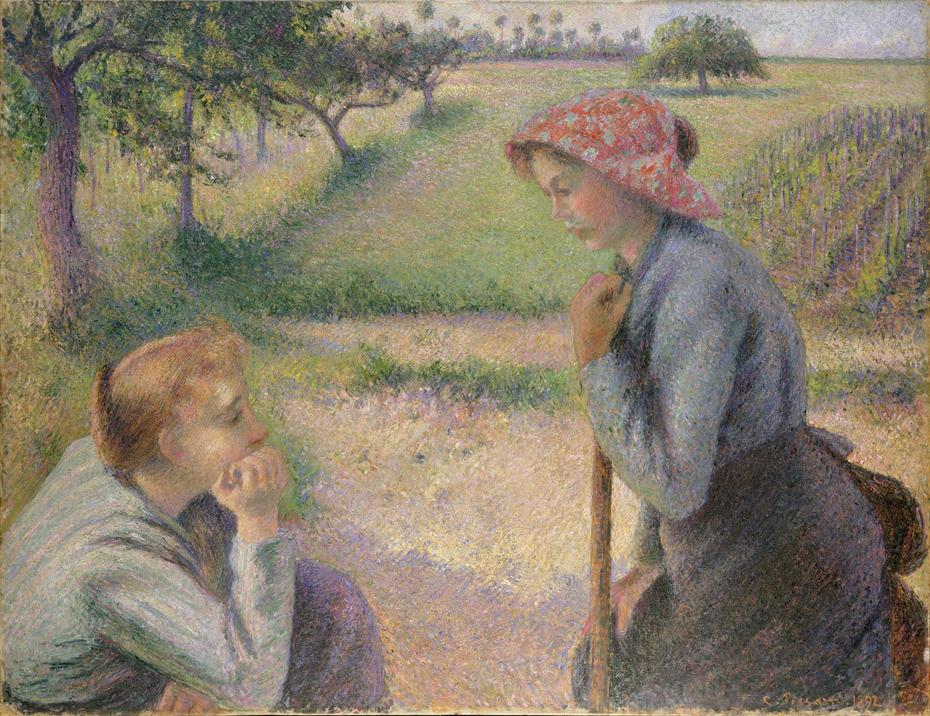 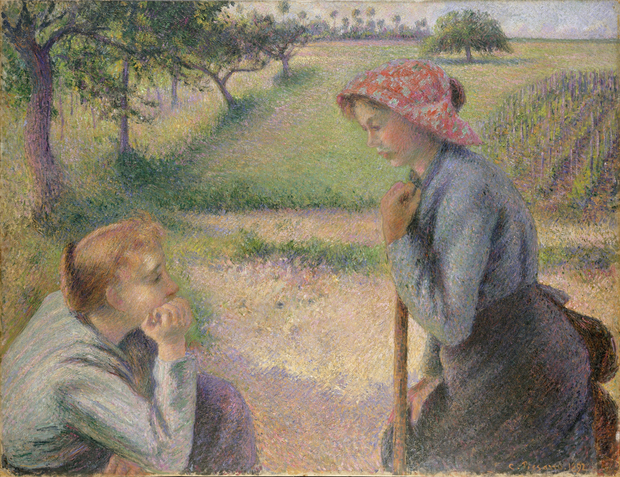 1891 - 1892
By virtue of their size, placement, and quiet dignity, these youthful laborers dominate the landscape setting—an open field near Pissarro’s house at Éragny. Sympathetic to anarchist ideals, the artist wanted to preserve the values of agrarian society that were being threatened by the rapid industrialization of France. He began this picture in summer 1891 and completed it in mid-January 1892, a month before the opening of a major exhibition of his work organized by his dealer Joseph Durand-Ruel. Many of the fifty paintings were sold from the show, but Pissarro kept this canvas and gave it to his wife.
Listen Audio...

Pissarro began this picture in the summer of 1891 and completed it in mid-January 1892, a month before the opening of a large exhibition of his work organized by Joseph Durand-Ruel. Pissarro's neo-impressionist paintings of the preceding five years or so had failed to interest his small circle of admirers; therefore the artist held great hopes for the exhibition to rescue him financially and critically. Many of the fifty paintings were sold from the show, but not this one. Afterwards, Pissarro presented this canvas, one of the largest of the group, to his wife, Julie Vellay; he never produced a larger one subsequently (Anne Poulet, memorandum dated August 10, 1971, Dept. of European Paintings files). Clark (1999) speculated that this gift may be linked to the picture’s subject, since Julie Vellay was the child of peasants; Richard Nathanson identified the figure on left as Eugenie Estruc, called Nini (1863–1931), Julie Vellay Pissarro’s niece, and a maid to Pissarro’s mother (letter to Christopher Lloyd, June 22, 1999, copy in Dept. of European Paintings files). Although there is no known study for the right-hand figure, there is a pastel portrait of Nini which served as the basis for the woman on the left (private collection, France; Pissarro and Venturi 1939, no. 1593). In working out the trees which retreat on a sharp diagonal at left, Pissarro returned to a device he had used on at least three occasions almost a decade before, based on a single black chalk drawing executed out of doors (Ashmolean Museum, Oxford).

Pissarro was already moving away from pointillist technique by 1891, and this canvas shows the variety of marks and intuited approaches to color division that he had developed as an alternative to Seurat's much more controlled method. In his letters, Pissarro explained that he sought "sensation", perhaps best expressed as an optical vibrancy. But the large scale of the figures, their prominent position, and their carefully choreographed relationship suggests the impact of Seurat's figure paintings, such as the recent Circus Sideshow, 1887–88 (The Met, 61.101.17), as well as recent works by Degas. Read more...
(Source: Metropolitan Museum of Art)

License:
Courtesy of the Metropolitan Museum of Art
For more:
https://www.metmuseum.org/art/collection/search/437304