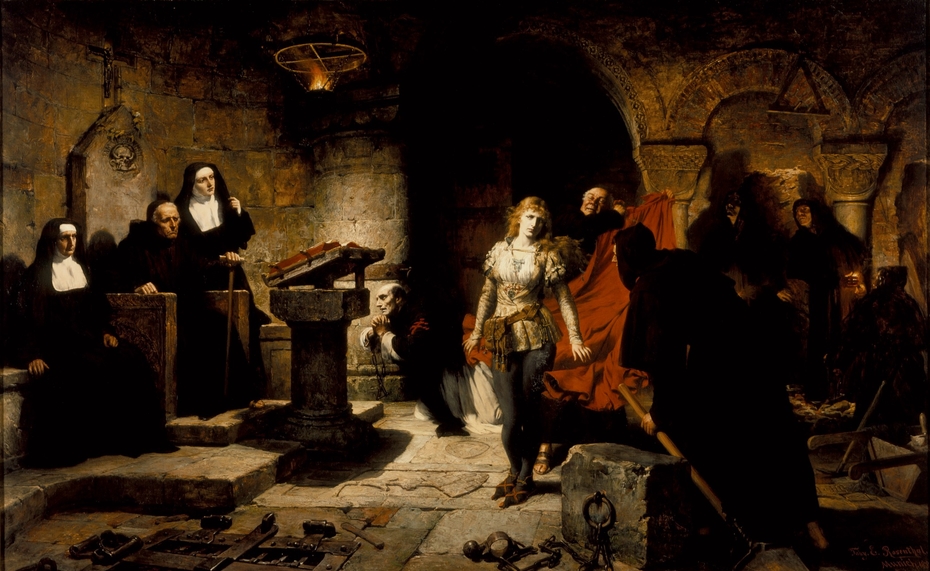 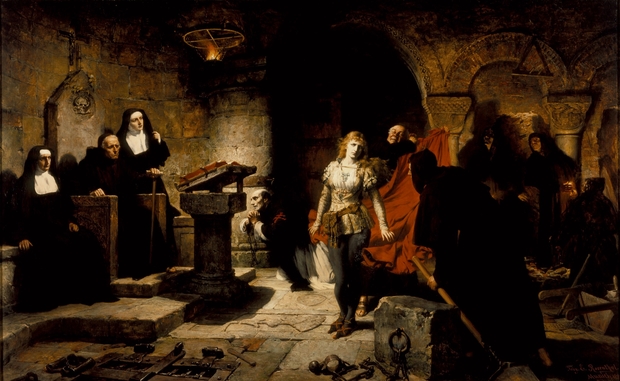 The Trial of Constance de Beverly

1880 - 1883
Notes from the Curator:
American art achieved cosmopolitan status in the decades following the nation’s centennial with figure paintings such as The Trial of Constance de Beverly by Toby Rosenthal (1848-1917). Although a scene set in the time of Henry VIII (1491-1547) the large canvas resonates of the 19th century and serves as a barometer of cultural taste. Rosenthal was one of the earliest American expatriate artists to achieve international fame. Prussian-born, he grew up in San Francisco but returned to Europe to enroll in the Royal Academy in Munich. There he was introduced to the academic belief in the superiority of history painting. Under Karl von Piloty, Rosenthal learned how to depict stories of an uplifting, moral character in dramatic, yet easily understood terms. While he lived in Germany, Rosenthal received his most significant commissions from Americans. In 1879 the San Francisco industrialist Irving M. Scott requested a scene from Marmion (1808), a romantic narrative poem by Sir Walter Scott (1771-1832). The tale was a favorite of Rosenthal’s patron, whose enthusiasm reflected the popularity of the Scotsman’s writings with the middle-class reading public. Scotts’ influence on 19th-century pictorial arts was equally pervasive, for beginning in the 1820s, his novels revolutionized history painting in Europe and America by providing artists with stories of a human character that had mass appeal. The Trial of Constance de Beverly was a late example of such painting. Marmion is a tale fraught with all the elements of a bestseller: romance, danger, abandonment, and death. The story concerns Constance de Beverly, a beautiful young novice who is seduced into leaving the convent by Lord Marmion, a handsome but eventually faithless suitor. Rosenthal chose not to delineate a romantic episode, but to focus on the tense courtroom drama as Constance awaits her fate at the hands of a clerical tribune. In quite operatic fashion befitting medieval revival novels and history paintings, Rosenthal depicted the moment when a monk plucks Constance’s cloak from her shoulders to reveal her clothed as Lord Marmion’s page: in the background two monks gleefully prepare the niche where she will be bricked-up alive for breaking her religious vows. Rosenthal brilliantly exploited the romantic elements of gothic literature by heightening the sinister, almost ghoulish character of the scene through a cavernous setting, brownish-black palette, tenebrous lighting, and theatrical facial expressions. Rosenthal sought complete accuracy in the details of the setting and costume. He did depart dramatically from the story, however, by omitting Lord Marmion from the trial scene. By doing so, Constance becomes the main protagonist, standing center stage, a heroine despite the tragedy of her situation. Painted during a period when most women still had little control of their own lives, Rosenthal’s Constance was someone who determined her own destiny. After winning a gold medal at the 1883 Munich International Art Exhibition, the painting was exhibited in San Francisco to great acclaim. Saved from the city’s 1906 earthquake and fire through quick thinking, it has remained in California ever since. [source]