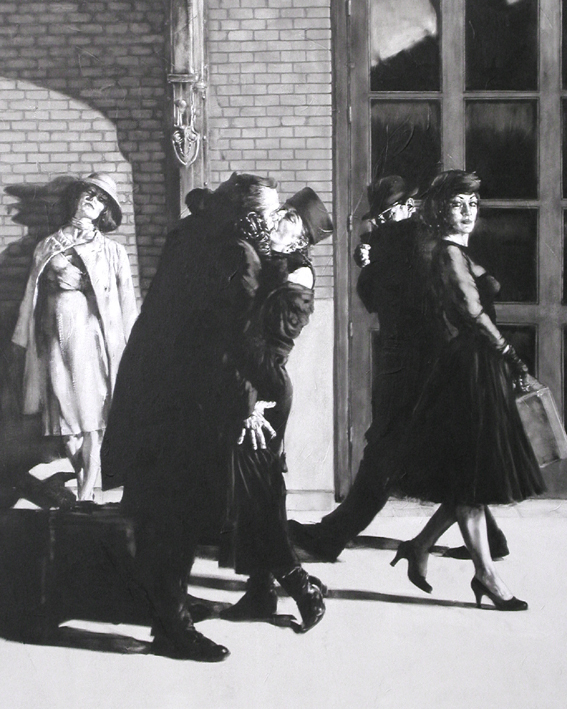 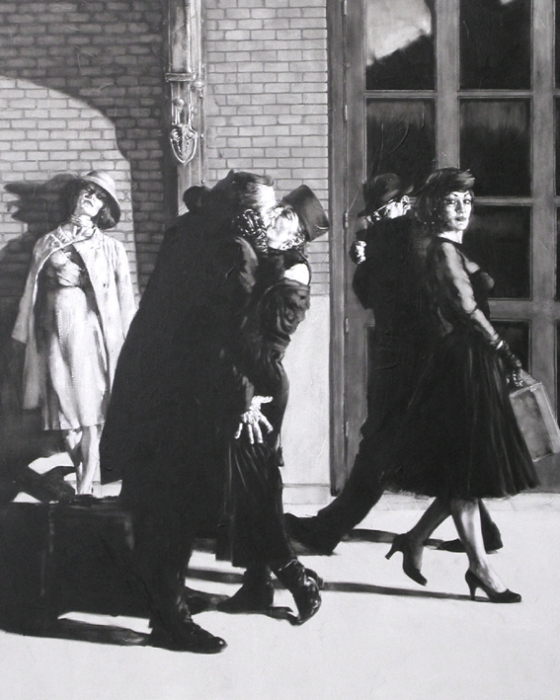 These pictures portray the journey between mortality and eternal salvation or eternal damnation. It is the beginning of the journey into the afterlife. The Paintings will focus on one individual through each cycle. This is a solitary journey but will be taken in the company of other travellers. The journey will be made by rail, taking the travellers on independent routes from station to station, from train to train. Occasionally, their paths may cross. It is not a happy journey nor a sad one. It is a journey of introspection and meditation. Each individual soul will carry with them the essence of their personality the individuals will be varied and, over time, represent a cross section of society.

Essentially, two realties will exist in each picture. The reality of the souls and the surreality of the characters that they encounter along their journey. The Final Journey - Overview The premise of the “Journey” is based first of all on the assumption of the existence of an “after life” and the tradition from life to death. In a larger view this takes place in three parts: The act of dying, the transition from life to the after life and the passage beyond the gates of heaven and hell or the “Judgement”. I will be working within the second phase. “The Journey” then is taken from the moment of death up to the gates of Judgement. This corridor between eternal salvation and eternal damnation is a type of purgatory. It is represented (in mortal terms) by a rail line that takes souls to their ultimate destination (Judgement). All souls travel this line. Some make the journey as penitents, others as travellers. Some like children (the innocents) are delivered to heaven on the “Express”. The souls travel from station to station and from train to train on their journey. One may say this represents a time of meditation on their former lives and an adjustment to their new existence.

The Journey itself is an allegory of migration and Immigration. The Story Within this larger landscape exists an intimate examination of individual souls along their journey. Within each Cycle or Chapter, one soul will become the focal point. Here upon an epic post-human stage, the story of life and the story of one individual life can be simultaneously told. It will be the fusion of the epic and the intimate, the global and the individual. The first stories will be about searching. They will be told based on the notion that when we die we will be reunited with our loved ones in the eternal hereafter. A man, an ordinary man , will search for his lost wife. A young woman will search for her lost lover. Each life and each death will be glimpsed as the journey goes on.

The Frontier The no man’s land or corridor that lies between Heaven and Hell and which leads to their entrance gates will constitute the “theatre of life and death. To the right, beyond the barbed wire fences and crumbling walls, exists the ravaged ruins and ghettos of eternal damnation. To the left of the line past floral columns are the lush gardens of eternal salvation. The corridor is the artery that feeds pain and suffering, pleasure and peace. The corridor not only transports souls from mortal existence to their judgement but is also the line that shuttles Angels (and Demons in disguise) back and forth between earth and the holy firmament. Here we will see the Angels of the Ninth, Eight, Sixth and occasionally glimpses of the magnificent Seventh Choir on their journey between the two existences, Also here, within the passage way, we will observe the Angels that work inside no man’s land. Border Guards, Police, Transportation Angels, Information Angels and so on. There will be the possibility too of revealing the covert elements of this zone. The Devil’s spies and insurgents for, beyond his channel of neutrality lie the strong odours of impending war and revolution.

License:
All rights reserved. Exhibited on USEUM with the permission of the rights owner.
For more:
https://www.behance.net/gallery/16648983/The-Final-Journey-…