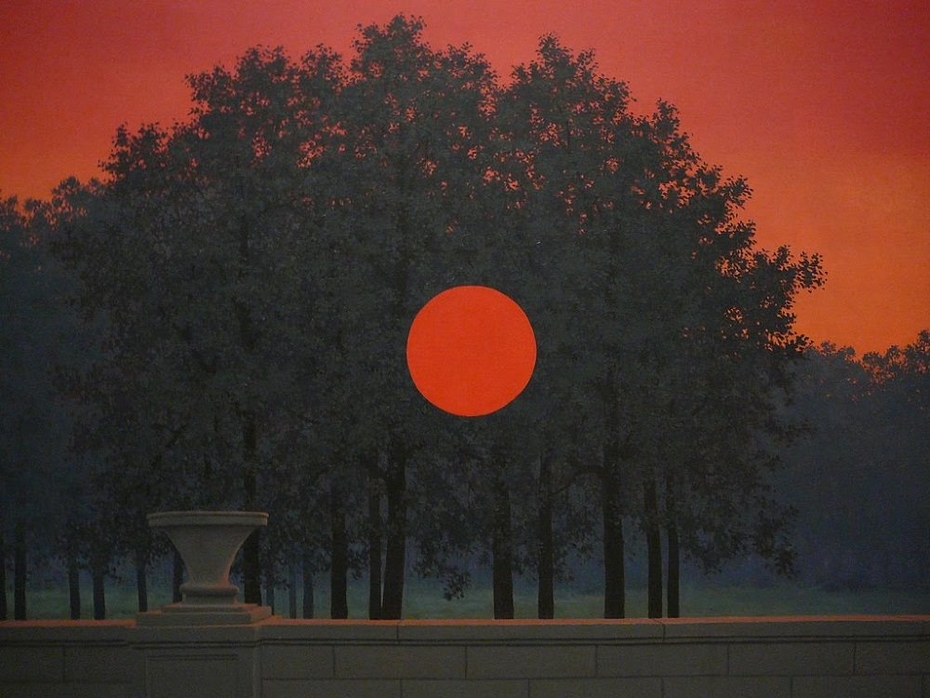 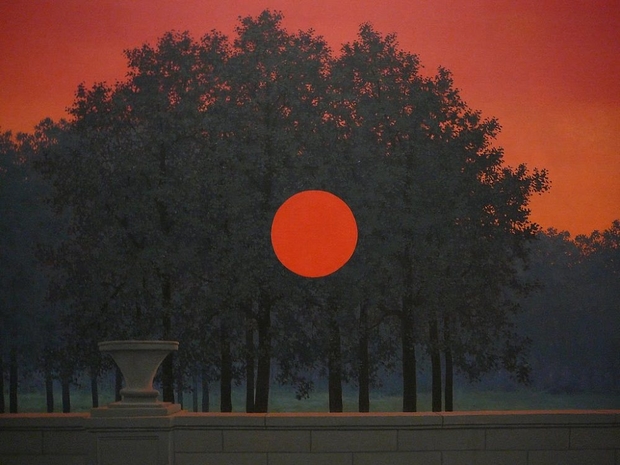 1958
This canvas is the last, largest, and most impressive of four oil paintings of this title; the three other paintings are all dated to 1957 (ill. 851–52, and p. 272, no. 857). There are also five versions of this image in gouache, starting in 1956 and extending to 1964 (ill. In ibid., vol. 4, 1994, p. 193, no. 1421, p. 198, no. 1429, p. 273, no. 1563, and pp. 275–76, nos. 1566 and 1568). Magritte first realized the idea and conceived the title for this series in the first of these gouaches completed in 1956 shortly after he announced to Mirabelle Dors and Maurice Rapin, in a letter of November 9, 1956, that “Le Banquet” was one of his latest “finds” (ibid., vol. 3, 1993, p. 267). The little sketch in this letter shows the main motif of the sun visible before a clump of trees set in an unspecified landscape. In the first oil version (as in the earlier related image, The Sixteenth of September, 1956, location unknown; ibid., vol. 3, 1993, p. 254, no. 834, ill., which shows the crescent moon on a large tree), the clump of trees is set in a meadowlike clearing dotted with large stones. In the second oil version of The Banquet, as in the Bergman canvas, the woodland glade is replaced with a stone parapet or balustrade, whose top is lit by the sun’s rays. This feature suggests a parklike setting, a domesticated concept of nature suited to Magritte’s deadpan, realist style. The proportions of the objects in relation to one another also differ from canvas to canvas; in the picture under dis­cussion, the sun looms larger in relation to the trees than in other versions and appears therefore closer to the viewer. It is interesting that, although the motif in essential respects is identical, significant variations mark each version as a distinct image.

The Banquet series is a development of another se­ries on which Magritte had started working in February 1956 and which he called The Place in the Sun. In these pictures, Magritte focused on the Surrealist idea of displacement, but with a particular twist. One object was superimposed on another larger one to which it was unrelated. The original series included an image of a seated scribe superimposed on an apple (ibid., vol. 3, 1993, pp. 252–53, no. 833, ill.) and Sandro Botticell’s Primavera silhouetted against a figure in a bowler hat seen from behind (ibid., vol. 3, 1998, p. 258, no. 837, ill.). Magritte’s approach in these pictures resembled what he referred to as “Objective stimulus,” a term he applied to those instances in which he replaced an object familiar to a particular context with one related to it but out of place, as he did in his 1933 painting Elective Affinities of a huge egg in a birdcage (Paris, E. Perier; Sarah Whitfield, Magritte, London, The Hayward Gallery, 1992, exh. cat., no. 60, ill., n. pag.). As he explained to Rapin, The Place in the Sun is if you like an "Objective stimulus" with the difference that the image which comes "on" another has a still greater charge of strangeness (ibid., vol. 3, 1993, p. 253). In a subsequent letter to Dors and Rapin, Magritte wrote of The Sixteenth of September, “I have continued with my ‘Places in the Sun’ but by now the title is no longer suitable for a big tree in the evening with a crescent moon above it!” (ibid., vol. 3, 1993, p. 254). The object that would have been hidden (crescent moon, sun) is now visible, hiding part of the object that would have hidden it.