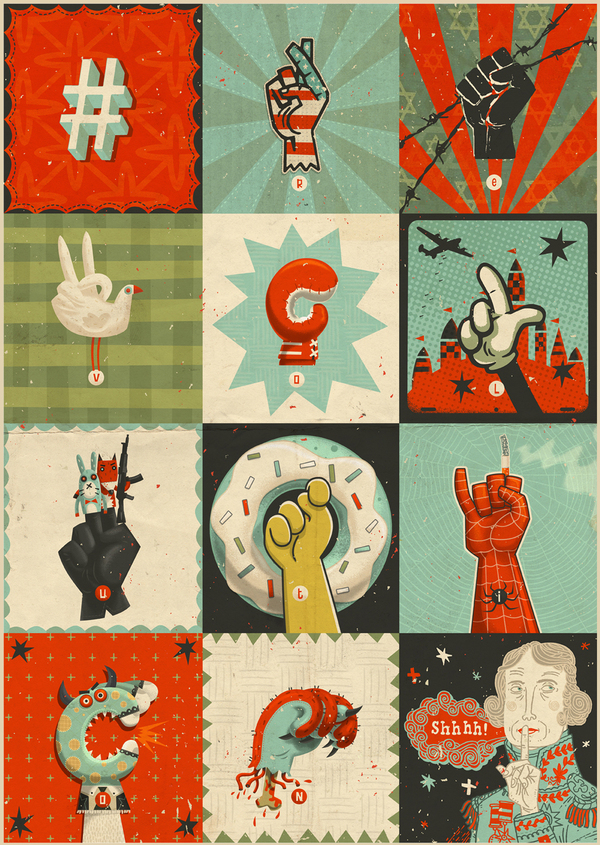 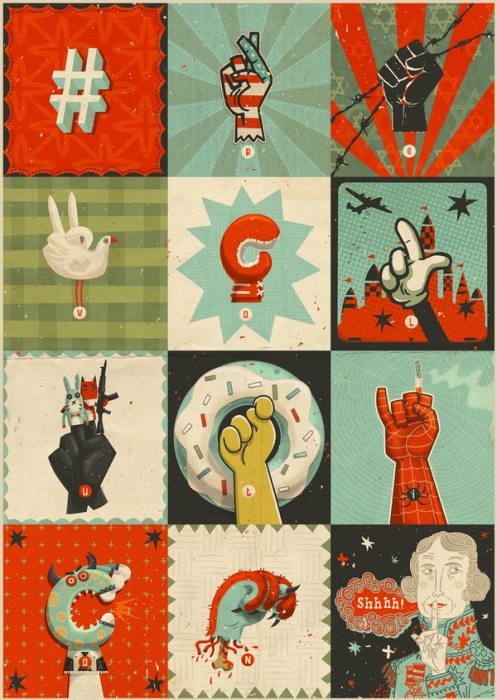 2011
All the Signs of REVOLUTION
*Winner of the Illustration at Fire Award. On the theme of "REVOLUTION" and based on the sign language alphabet.
*Selected for the 54th Society of Illustrators NY awards

For a while, as a kid I was fascinated by sign language and spent hours learning it with a friend. To us, it was a secret language only we could understand.

I think my best illustrations always have a element of the unpredictable about them, a serendipitous input. Something that wouldn’t normally be associated with the subject. While roughing out my thoughts on the Revolution illustration I’d photographed my own hand (in the traditional fist of defiance pose) for reference. As I sketched away my mind flashed back to the bookmark I’d used to learn sign language as a kid. It had had the full alphabet in a grid pattern, each hand position had a small black and white line art illustration with the letter underneath.

I quickly found reference for the Sign Language Alphabet online and played around with a grid pattern. I’d earlier thought the idea of a silent revolution was a powerful idea but hadn’t found a way to represent it. The “Signs” idea seemed to cover this also. In the grid format I still had 2 squares to fill. So I dropped in a 17th century General (to represent past revolutions) at the end and a hash tag, representing modern media’s role in calling forth, reporting on, and tracking down revolutionists.

The other element I should mention is the illustration style. I have quite a mixed background when it comes to style influences. I studied technical illustration, worked on The Beano and had several years in TV animation before finding illustration about 20 years ago. I’d like to think that successfully merging together multiple styles within the grid represents a more personal struggle to find a style that is mine. Possibly for me, this is the real resolution and evolution of this REVOLUTION.

License:
All rights reserved. Exhibited on USEUM with the permission of the rights owner.
For more:
http://www.behance.net/gallery/Revolution/2462151