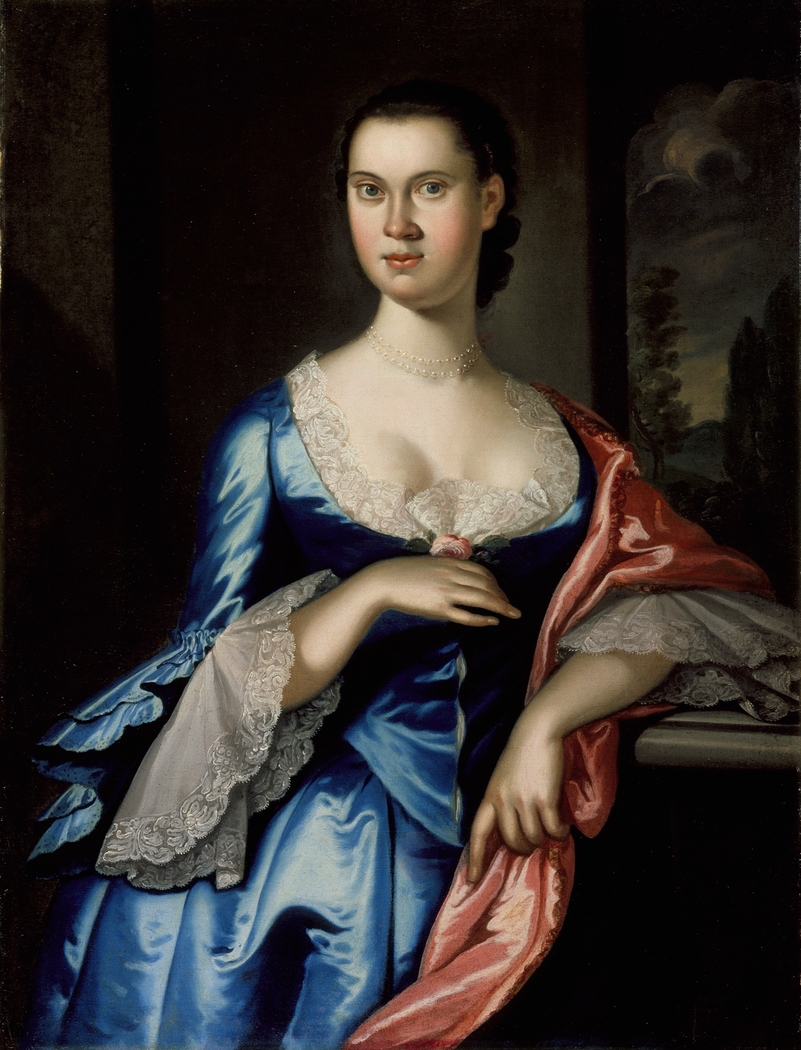 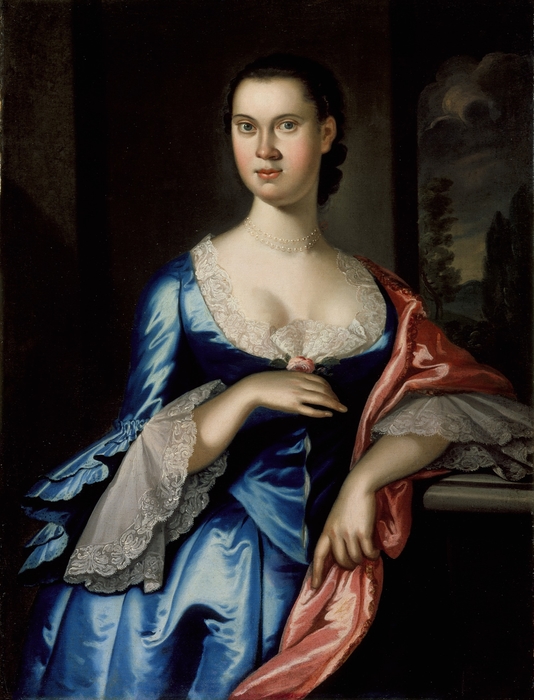 1762
Notes from the Curator:
The museum’s portrait was painted in 1762, at the peak of the artist’s abilities. The previous year Hesselius had obtained the prestigious commission to paint the portraits of the four children of Benedict Calvert, 1761 (Baltimore Museum of Art). Having begun his career under the stylistic influence of Robert Feke, he had by this point come under the influence of John Wollaston (active 1736-1767), who then was working in the mid-Atlantic region. In his mature work a sculptural feeling for clear forms and volumes recalls the work of Feke. The head, for instance, is isolated as a distinct form, high on a thin neck, its shapes slightly simplified and clarified. The heavy, lidded, almond eyes betray the example of Wollaston, as do the decorative elaboration of lace and extensive patterning of highlights in the drapery. More his own is Hesselius’s use of strong color, in this case a brilliant blue in the dress and bright pink in the shawl, echoed in the high color of the face. The museum’s painting is exceptionally well preserved for the work of Hesselius and consequently unusually impressive. The subject was born in 1742 or 1743, the daughter of Samuel Chew III of Anne Arundel County and his wife Sarah Lock. The museum’s painting is one of four portraits of members of the Chew family executed by Hesselius in 1762. One is a portrait of Elizabeth’s mother, another is of Elizabeth’s brother, Samuel Lloyd Chew (both unlocated), and the fourth is another version of the portrait of Elizabeth (Brooklyn Museum). The other version is smaller (28 3/8 x 25 1/8 inches), and only a bust-length, with Elizabeth Smith wearing a silver dress, with blue bow, and chocolate-colored shawl and holding a sprig of flowers in a slightly different gesture. In 1939 the museum’s painting was the only one of this group of four not in the collection of Samuel Claggett Chew of Bryn Mawr, Pennsylvania. The fact that the museum’s painting descended through Mrs. Smith’s family rather than the Chew family suggests the possibility that it was commissioned separately by Mr. and Mrs. Smith. Since Elizabeth Chew was married on February 11, 1762, it is possible that the present painting was a marriage portrait. Her first husband was John Hamilton Smith, a resident and plantation owner of Calvert County; they had two daughters, Elizabeth Chew and Mary. Her half-sister, Mary, married a Dr. Alexander Hamilton Smith in 1767. (There was a prominent Scottish physician of the same name living in Annapolis in the 1740s.) Records for Saint James’s (Old Herring Creek) Parish show a large family with the name of Smith living there in the early eighteenth century. Elizabeth Chew Smith later married a man named Sprigg. It is not known whether this second marriage produced issue. She died sometime after 1800. [source]