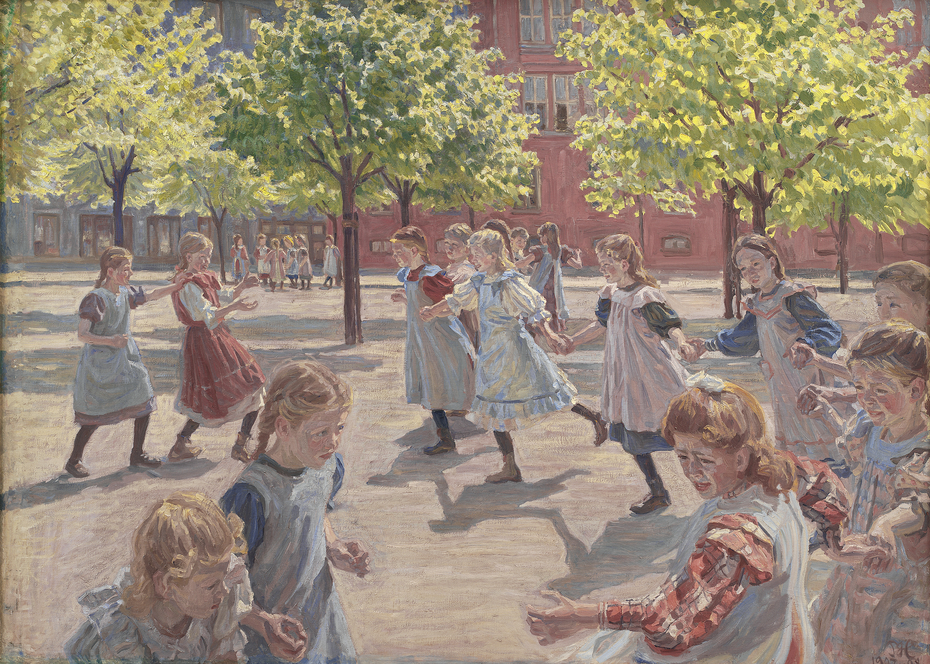 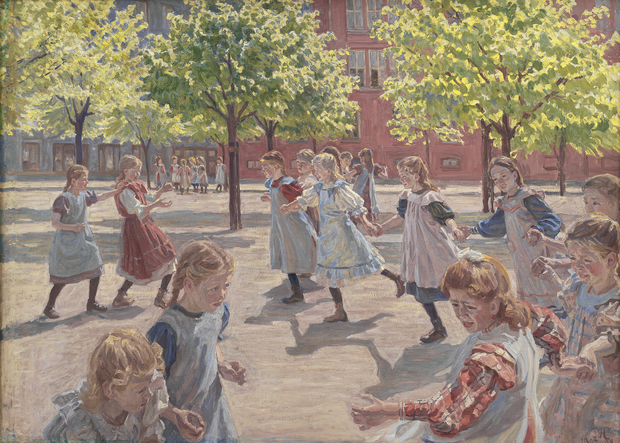 1907 - 1908
Hand in hand, a chain of little girls surge ahead, trying to catch their friends. The dynamic movement is accentuated by abrupt cropping and flickering reflections in the girl’s faces and the new-leaved trees.

The painting's motif
The scene is from Copenhagen, specifically Enghave Plads on Vesterbro. From 1905 onwards, Peter Hansen kept his winter dwelling on Enghavevej, and he found most of his urban scenes in his neighbourhood. Without any indignation, but with keen interest in social issues he depicted modern life. He treated the idyllic aspects such as children playing and men enjoying a Sunday beer, but the vagabonds on Christianshavns Vold were also included in his image of the world.

The artist's association Fynboerne
As a student at Zahrtmann’s School during the years around 1890, Peter Hansen met two other artists from Funen: Johannes Larsen (1867-1961) and Fritz Syberg (1862-1939). Their friendship came to be at the heart of the artist’s association Fynboerne, but Peter Hansen’s most important sources of artistic inspiration were Kristian Zahrtmann (1843-1917) and Theodor Philipsen (1840-1920).

Inspired by Kristian Zahrtmann and Theodor Philipsen
Zahrtmann’s free treatment of colour and Philipsen’s mimetic Impressionism are continued in Hansen’s art. In Playing Children this legacy is apparent in the strong intensification of colour and the flickering reflections. Peter Hansen did not, however, become quite as anti-naturalistic in his colour treatment as Zahrtmann, nor did he dissolve his motifs in bursts of light and colour like Philipsen. Instead he retained his down-to-earth grip on reality as it is perceived.