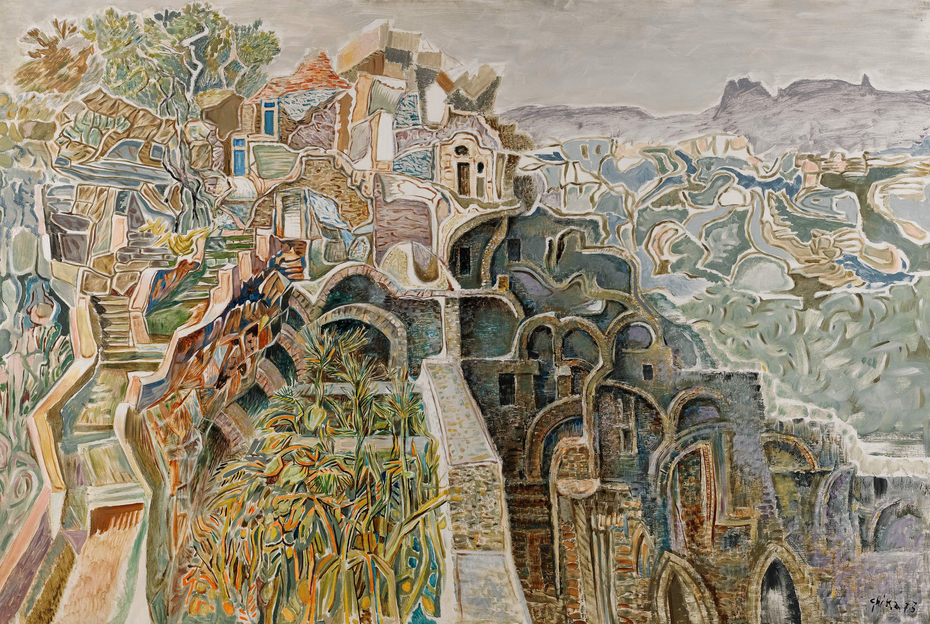 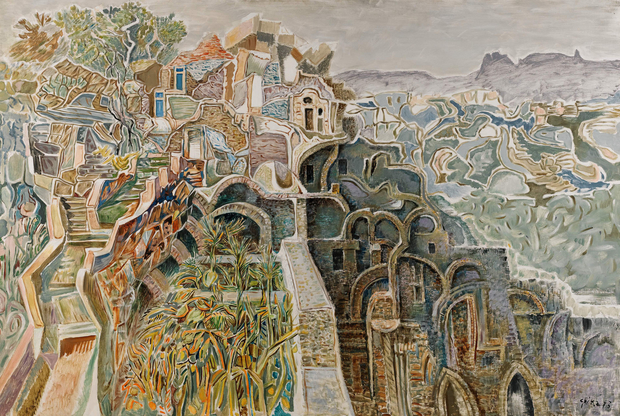 In this late landscape Ghika depicts the ruins of Mistras, a fortified medieval town built on Mount Taygetus on the Peloponnese. The work is an important example of Ghika's lyrical depictions of the Greek landscape he so admired, with sinuous line and lyrical dynamic. Labyrinthine paths and ruined arches lead the eye over an almost-abstract architectural network, with strong expressionist strokes and vivid blocks of colour to the centre-left contrasting with the pastel-coloured background to the right. This pulsing and contorted landscape is a familiar idiom in the oeuvre of Ghika, but his earlier angular geometry is cast aside for an even more emotional and directly descriptive rendering. With a virtuoso wealth of strokes and hues, the present work presents a rich display of Ghika's painterly skill.

Beginning and ending his life in Greece, Nicos Hadjikiriakos-Ghika began his artistic scholarship under Konstantinos Parthenis in Athens, relocating to Paris to enrol at the Sorbonne, the Ranson Academy and the studio of Dimitris Galanis. This erudite, well-travelled and sophisticated background would nourish a hungry mind, open to the concept of an analytic and mathematical form of modernism. This visual vocabulary owed much to the methodical teaching of Parthenis, with its emphasis on geometric principles, the Byzantine art that Ghika cherished, incorporating its 'strictness, the geometric, hierarchy,' and the work of artistic luminaries of the Parisian modernist enclave such as Pablo Picasso and Georges Braque (in Marina Lambraki-Plaka, ed., Four Centuries of Greek Painting, Athens, 1999, p. 139).
source: Sotheby's

License:
The image may be subject to copyright