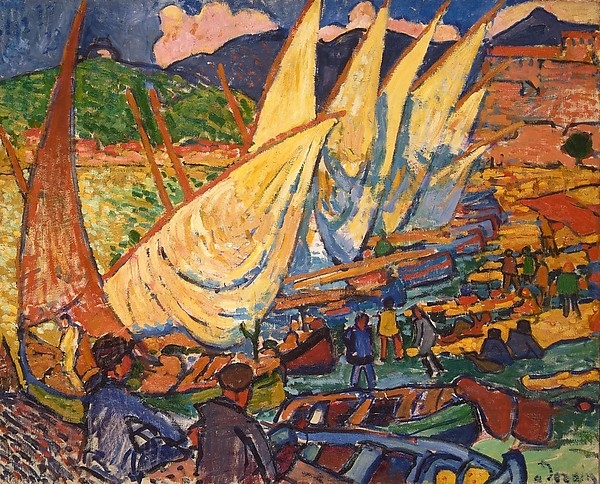 1905
In the summer of 1905 André Derain, then twenty-five, left Paris for a two-month sojourn with his friend Henri Matisse. They settled in the small fishing town of Collioure, on the southwest coast of France near the Spanish border. The painters had first met in Eugène Carrière's Paris studio in 1899, and it was with Matisse's help that Derain had received his parents' permission to pursue a career in art. During the summer in Collioure the two men discussed art theory and painted canvases filled with bright light, high color, and exuberant, often broken brushwork. Along with Maurice de Vlaminck, they were the major proponents of a short-lived movement known as Fauvism. (The term "Fauves"—"Wild Beasts"—was attached to these artists when their innovative work shocked and offended the sensibilities of viewers at the 1905 Salon d'Automne exhibition in Paris.)

Although Matisse and Derain worked closely in Collioure and painted similar scenes, their styles remained distinct. A painting like "Fishing Boats, Collioure" vividly illustrates Derain's characteristic use of dramatic perspective and diagonal recession into space. We take in the entire panorama from a high vantage point: busy figures on the shore, rocking boats and sails, and the majestic blue and green mountains anchored in the background and capped by billowy pink clouds. The curved shoreline and rhythmic arrangement of overlapping sails lead our eye into the picture. Two seated men, surrogates for the viewer, observe the energetic scene. Derain's palette is Fauvist: vibrant and unnatural. One senses, however, his growing dissatisfaction with this style of painting. The discordant mixture of divisionist brushwork and flat painting and the insistence on heavily outlined images to enhance volumetric form seem contrived and angry. Indeed, Derain was soon to purge himself of Fauvism's impetuosity and go on to produce austere, monochromatic, Cubist-inspired works, several of which are in the Museum's collection. (Source: The Metropolitan Museum of Art)