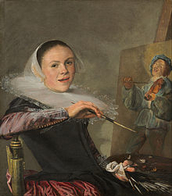 Judith Leyster (1609-1660)
Judith Leyster was born in Haarlem in 1609. Her father was a textile merchant and later a brewer. Leyster was probably apprenticed to Frans de Grebber and later worked at Frans Hals’s studio. Her paintings reveal the latter’s influence and that of his younger brother Dirck, as well as that of Jan Miense Molenaer, the painter she was to marry in 1636. Like Dirck Hals, Leyster mainly painted genre scenes of people playing music and having fun, although usually in smaller groups. Leyster was one of the few women to earn her living as a painter in the 17th century. She was the only woman and the only woman master painter registered with an artist guild – she joined in 1636. Leyster had her own studio in Haarlem - until she married. Her name disappeared into obscurity for more than two centuries, and only reemerged in the late 19th century. Around twenty of her paintings are known, including a self portrait.
more >
5