Mannerism is an artistic style and movement that developed in Europe from the later years of the Italian High Renaissance, around the 1520s, to the end of the 16th century when Baroque started to replace it. In that period, after the death of Raphael, art experienced a period of crisis. The work of the Renaissance masters Leonardo, Michelangelo and Raphael was credited with having arrived at a formal perfection and an ideal beauty difficult to overcome. Renaissance artworks were perfectly composed up to the last detail, thanks to artists having mastered anatomy, light and perspective. This led young artists to believe that there was nothing worth pursuing in art, that had not been achieved yet. From this point of view, Mannerism was born with the aim to develop a new kind of art that worked in a new direction, without pretending to imitate nature anymore, but instead was turned against the traditional artistic canon. This new style over the years became a distortion of the Renaissance perfection and an exaggeration of the previous movement's qualities. Even Michelangelo himself turned to Mannerism in the last years of his activity, especially in his Last Judgment fresco painted in the Sistine Chapel between 1536 and 1541. 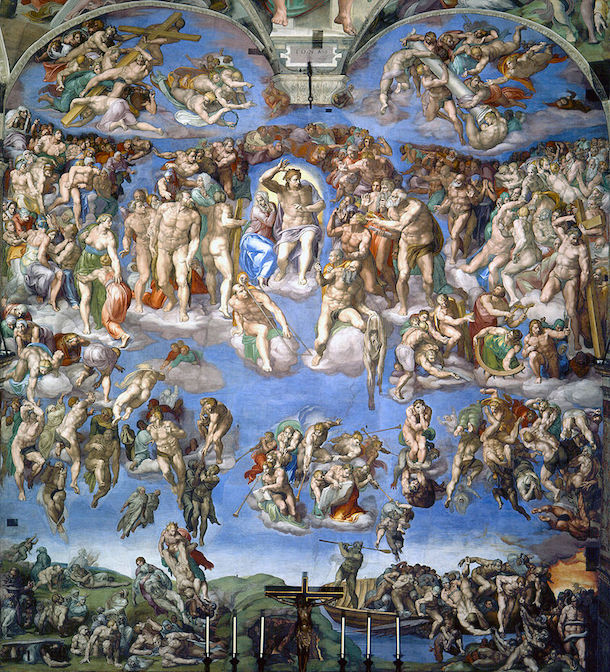 Additionally, the virtuosity, the technical artificiality over the composition and the exaggerated representation of moods and intense subjects of Mannerism reflected the Italian and European historical and social period of the 16th century. The most recent scientific discoveries of Copernicus and Galileo, and the geographical discoveries of Ferdinand Magellan and Christopher Columbus, who had challenged the canonical view of the world proving that the Earth is not flat and Europe was not the centre of the world as it was believed to be, created in men an insecurity, instability and uncertainty that Mannerism managed to express in art. Painters began to think that the laws of art such as the rational basis of balance and harmony were no longer sufficient to illustrate a world that had been torn from its axis.

Mannerism can be divided in two periods: Early Mannerism and High Mannerism.

Early Mannerism, which see the collaboration of some Italian artists such as Pontormo and Rosso Fiorentino in Florence, and Giulio Romano and Parmigianino in Rome, is the initial phase of Mannerism when artists aimed to react against the Renaissance tradition exaggerating the style of painting. The earliest experimental phase of Mannerism, known for its "anti-classical" forms, lasted until the first half of the century.

Late or High Mannerism, is the movement's second phase, where we see the collaboration of Tintoretto, Veronese, Bronzino and other painters, being differentiated from the earlier artistic virtuosity, seeking to imitate Renaissance art and its masters. This second phase saw the end of the movement when Caravaggio and his paintings in 1600 brought this problematic style to an end, leading to the rise of Baroque.