The Manifesto of Futurism (Manifesto del Futurismo in Italian), was written by the Italian poet Filippo Tommaso Marinetti (1876-1944) and published in the Italian newspaper La Gazzetta dell'Emilia and the French paper Le Figaro, in February 1909. The Manifesto initiated an artistic movement, Futurism, that was a rejection of the past, and a celebration of speed, machinery, violence, youth and industry; it also advocated the modernization and cultural rejuvenation of Italy.​ 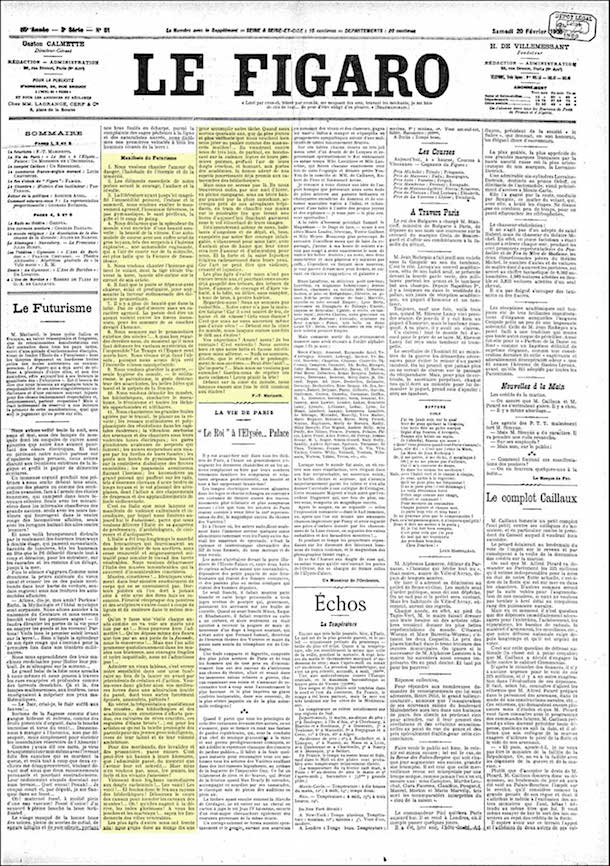 We had stayed up all night, my friends and I, under hanging mosque lamps with domes of filigreed brass, domes starred like our spirits, shining like them with the prisoned radiance of electric hearts. For hours we had trampled our atavistic ennui into rich oriental rugs, arguing up to the last confines of logic and blackening many reams of paper with our frenzied scribbling.

An immense pride was buoying us up, because we felt ourselves alone at that hour, alone, awake, and on our feet, like proud beacons or forward sentries against an army of hostile stars glaring down at us from their celestial encampments. Alone with stokers feeding the hellish fires of great ships, alone with the black spectres who grope in the red-hot bellies of locomotives launched on their crazy courses, alone with drunkards reeling like wounded birds along the city walls.

Suddenly we jumped, hearing the mighty noise of the huge double-decker trams that rumbled by outside, ablaze with colored lights, like villages on holiday suddenly struck and uprooted by the flooding Po and dragged over falls and through gourges to the sea.

Then the silence deepened. But, as we listened to the old canal muttering its feeble prayers and the creaking bones of sickly palaces above their damp green beards, under the windows we suddenly heard the famished roar of automobiles.

‘Let’s go!’ I said. ‘Friends, away! Let’s go! Mythology and the Mystic Ideal are defeated at last. We’re about to see the Centaur’s birth and, soon after, the first flight of Angels!... We must shake at the gates of life, test the bolts and hinges. Let’s go! Look there, on the earth, the very first dawn! There’s nothing to match the splendor of the sun’s red sword, slashing for the first time through our millennial gloom!’

We went up to the three snorting beasts, to lay amorous hands on their torrid breasts. I stretched out on my car like a corpse on its bier, but revived at once under the steering wheel, a guillotine blade that threatened my stomach.

The raging broom of madness swept us out of ourselves and drove us through streets as rough and deep as the beds of torrents. Here and there, sick lamplight through window glass taught us to distrust the deceitful mathematics of our perishing eyes.

I cried, ‘The scent, the scent alone is enough for our beasts.’

And like young lions we ran after Death, its dark pelt blotched with pale crosses as it escaped down the vast violet living and throbbing sky.

But we had no ideal Mistress raising her divine form to the clouds, nor any cruel Queen to whom to offer our bodies, twisted like Byzantine rings! There was nothing to make us wish for death, unless the wish to be free at last from the weight of our courage!

And on we raced, hurling watchdogs against doorsteps, curling them under our burning tires like collars under a flatiron. Death, domesticated, met me at every turn, gracefully holding out a paw, or once in a while hunkering down, making velvety caressing eyes at me from every puddle.

‘Let’s break out of the horrible shell of wisdom and throw ourselves like pride-ripened fruit into the wide, contorted mouth of the wind! Let’s give ourselves utterly to the Unknown, not in desperation but only to replenish the deep wells of the Absurd!’

The words were scarcely out of my mouth when I spun my car around with the frenzy of a dog trying to bite its tail, and there, suddenly, were two cyclists coming towards me, shaking their fists, wobbling like two equally convincing but nevertheless contradictory arguments. Their stupid dilemma was blocking my way— Damn! Ouch!... I stopped short and to my disgust rolled over into a ditch with my wheels in the air...

O maternal ditch, almost full of muddy water! Fair factory drain! I gulped down your nourishing sludge; and I remembered the blessed black beast of my Sudanese nurse... When I came up—torn, filthy, and stinking— from under the capsized car, I felt the white-hot iron of joy deliciously pass through my heart!

A crowd of fishermen with handlines and gouty naturalists were already swarming around the prodigy. With patient, loving care those people rigged a tall derrick and iron grapnels to fish out my car, like a big beached shark. Up it came from the ditch, slowly, leaving in the bottom, like scales, its heavy framework of good sense and its soft upholstery of comfort.

They thought it was dead, my beautiful shark, but a caress from me was enough to revive it; and there it was, alive again, running on its powerful fins!

And so, faces smeared with good factory muck—plastered with metallic waste, with senseless sweat, with celestial soot—we, bruised, our arms in slings, but unafraid, declared our high intentions to all the living of the earth: 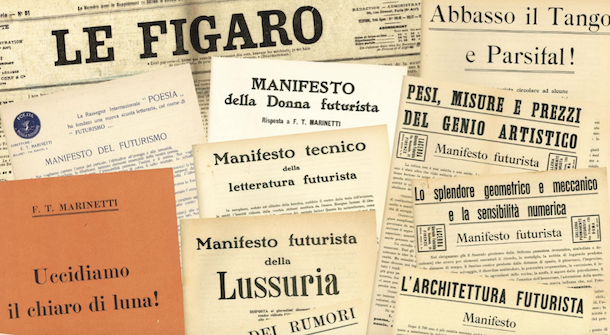 It is from Italy that we launch through the world this violently upsetting incendiary manifesto of ours. With it, today, we establish Futurism, because we want to free this land from its smelly gangrene of professors, archaeologists, ciceroni and antiquarians. For too long has Italy been a dealer in second-hand clothes. We mean to free her from the numberless museums that cover her like so many graveyards.

Museums: cemeteries!... Identical, surely, in the sinister promiscuity of so many bodies unknown to one another. Museums: public dormitories where one lies forever beside hated or unknown beings. Museums: absurd abattoirs of painters and sculptors ferociously slaughtering each other with color-blows and line-blows, the length of the fought-over walls!

That one should make an annual pilgrimage, just as one goes to the graveyard on All Souls’ Day—that I grant. That once a year one should leave a floral tribute beneath the Gioconda, I grant you that... But I don’t admit that our sorrows, our fragile courage, our morbid restlessness should be given a daily conducted tour through the museums. Why poison ourselves? Why rot?

And what is there to see in an old picture except the laborious contortions of an artist throwing himself against the barriers that thwart his desire to express his dream completely?... Admiring an old picture is the same as pouring our sensibility into a funerary urn instead of hurtling it far off, in violent spasms of action and creation.

Do you, then, wish to waste all your best powers in this eternal and futile worship of the past, from which you emerge fatally exhausted, shrunken, beaten down?

In truth I tell you that daily visits to museums, libraries, and academies (cemeteries of empty exertion, Calvaries of crucified dreams, registries of aborted beginnings!) are, for artists, as damaging as the prolonged supervision by parents of certain young people drunk with their talent and their ambitious wills. When the future is barred to them, the admirable past may be a solace for the ills of the moribund, the sickly, the prisoner... But we want no part of it, the past, we the young and strong Futurists!

So let them come, the gay incendiaries with charred fingers! Here they are! Here they are!... Come on! set fire to the library shelves! Turn aside the canals to flood the museums!... Oh, the joy of seeing the glorious old canvases bobbing adrift on those waters, discolored and shredded!... Take up your pickaxes, your axes and hammers and wreck, wreck the venerable cities, pitilessly!

The oldest of us is thirty: so we have at least a decade for finishing our work. When we are forty, other younger and stronger men will probably throw us in the wastebasket like useless manuscripts—we want it to happen!

They will come against us, our successors, will come from far away, from every quarter, dancing to the winged cadence of their first songs, flexing the hooked claws of predators, sniffing doglike at the academy doors the strong odor of our decaying minds, which will have already been promised to the literary catacombs.

But we won’t be there... At last they’ll find us—one winter’s night—in open country, beneath a sad roof drummed by a monotonous rain. They’ll see us crouched beside our trembling aeroplanes in the act of warming our hands at the poor little blaze that our books of today will give out when they take fire from the flight of our images.

They’ll storm around us, panting with scorn and anguish, and all of them, exasperated by our proud daring, will hurtle to kill us, driven by a hatred the more implacable the more their hearts will be drunk with love and admiration for us.

Injustice, strong and sane, will break out radiantly in their eyes.

Art, in fact, can be nothing but violence, cruelty, and injustice.

The oldest of us is thirty: even so we have already scattered treasures, a thousand treasures of force, love, courage, astuteness, and raw will-power; have thrown them impatiently away, with fury, carelessly, unhesitatingly, breathless, and unresting... Look at us! We are still untired! Our hearts know no weariness because they are fed with fire, hatred, and speed!... Does that amaze you? It should, because you can never remember having lived! Erect on the summit of the world, once again we hurl our defiance at the stars!

You have objections?—Enough! Enough! We know them... We’ve understood!... Our fine deceitful intelligence tells us that we are the revival and extension of our ancestors— Perhaps!... If only it were so!—But who cares? We don’t want to understand!... Woe to anyone who says those infamous words to us again!

Lift up your heads!

Erect on the summit of the world, once again we hurl defiance to the stars!