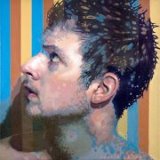 Justin received his BFA from the Columbus College of Art & Design in 2006. He left the school with a directed focus on photo realistic portraiture. Between 2005 and 2008, he participated in group shows with The Ohio Art League, which allowed his portraits to hang in such spaces as The Columbus Museum of Contemporary Art. Justin earned his MFA in Figurative Painting from the Academy of Art University in San Francisco, CA. in the Spring of 2011.
more >
18