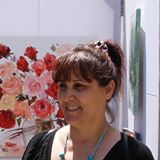 Elena Bissinger artist,born Oros on 02 January 1964, Beius, Bihor, Romania, the first child of a family of 5 girls . Father painter by profession, he found my little artistic talents and was my first mentor in the fine arts.
I paint since middle school, but I consummate artistic talent in various art schools, graduating Art School Francis Hubik Oradea and licensed at the Faculty of Visual Arts, Oradea at painting department.
In 1997 I made the first art exhibition was followed by many others in the country and abroad, especially in Illingen menzionez Germaia, Dien Hilfs Haushalts 2005.
In many group exhibitions I attended I have been evidenced both in style and colors as diverse and full of optimism which is reflected in paintings executed.
Thus paintings releasing a flow of positive energy and Themes of diversified impressionableness style of flowers with a knife technique gives the impression of real palpable.
Also influenced by abstract fascination, I transposed on canvas gestural style and full of effervescence, inner passions lived experienced the increased intensity the thirst for life.
In 2008 I was diagnosed with cervical cancer and that made ​​me love more the life and transposing it as I feel through art and poetry.
The most relevant events in the career of painter infuence me and gave me an extra power, straigthness and strength of character.

I granted interview to "Newspaper 5" Tablouri-de-vis.ro and Comunitateadearta.com.
Participation in international art camps brought me in winning the award "Golden Brush" 2010 in Bosnia and Herzegovina organized camp-BRCKO, gallery LIKUM.
I participated in various exhibitions organized in Las Vegas attending the World Art Foundation 2010 with painting "Green".
And 1st place in Tree Contest Fineartamerica 2010 painting " Si ma-ngan cu vantul"
Appear in distinguished art catalogs and publications in 2011 Contemporary International Artists' ICA vol PUBLISHING
In June 2010 I opened art gallery Maryelen, Beius ,together with one of my sisters with Mariana and she is also an artist.
In August 2011 appear in International Dictionary of Atrists vol.1
March 2011 to hold a certificate of Merit Energy Art Salon Competition 2011 for his "Cand curcubeul danseaza" which was exhibited at the International Exhibition in Novgorod Russia.
I was designated in 2011 TalentNextDoor international jury, which appear in some of the works.
In 2011 Diploma of Excellence (Honorable Award)-MAB 3 / MEDIA 3.ART Biennial 2011 Art Addiction International Gallery Launched from Sweden.
In August 26, 2012 the first prize of expressiveness to the work
"Interpretare" on Comunitateadearta, Bucharest.

On February 6, 2012 I started with poetry and paintings at "Armonii culturale".
Relevant Trade dream Paintings 2011-2012 organized at the Tablouri de vis at Palatul Parlamentului Sala Brancisi Bucuresti.
In March 22, 2012 to participate in a charity organized by the Art Revolution Taipei "Hundreds Of Celebrities' Charity Sale".
March 1, 2013 designated as president of the Artists' Union offices in Beius.
more >
6