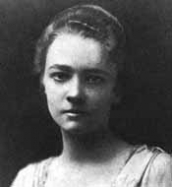 Katherine Linn Sage (June 25, 1898 – January 8, 1963), usually known as Kay Sage, was an American Surrealist artist and poet. She was active between the years of 1936 and 1963, the year she committed suicide. She married the surrealist painter Yves Tanguy in 1940, and was deeply affected by his sudden death by stroke in 1955. A member of the Golden Age, and later the Post-War periods of surrealism, she is mostly recognized for her artistic works, which typically contain themes of an architectural nature.