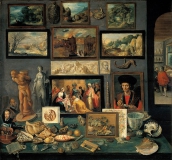 The best known member of a family of Flemish painters, Frans Francken the Younger (b. 1581 - d. 1642) was extremely popular in his lifetime. He probably served an apprenticeship in his father's studio and trained with his uncle in Paris. In 1605 he became a master in the Antwerp Guild of Saint Luke.

Francken created altarpieces and painted furniture panels, but he was most renowned for his small, finely crafted cabinet pictures of historical, mythological, or allegorical themes. Francken introduced new subject matter to Flemish art, often with a moralizing message. His luxurious imaginary art galleries influenced Jan Brueghel the Elder and Peter Paul Rubens, and his "monkeys' kitchens," allegorical scenes of monkeys enacting human vices, remained popular into the next generation of Flemish painters.

Francken's skill lay in small figures; his best paintings were usually collaborations with architecture or landscape specialists. Over time, his moralizing gave way to a stronger emphasis on genre elements, and his paint application evolved from a thick impasto to thin glazes and freer brushwork. His studio was enormously prolific. The records of the art dealer for whom he worked show replicas and copies for sale as well as originals; these copies were probably made by Francken's own sons, sons-in-law, and other apprentices.