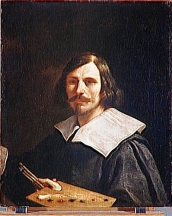 Giovanni Francesco Barbieri (1591 - 1666) was called Guercino in reference to his pronounced squint. He was the leading Bolognese painter after the death of Guido Reni. His earlier pictures typically combine the chiaroscuro effects of Caravaggio with a charm and softness not usually found in followers of this artist.

Guercino was born at Cento, near Bologna. He was largely self-taught but influenced by the Carracci and particularly by Ludovico Carracci. An early commission in Bologna was the altarpiece of the 'Investiture of Saint William' (1620, Bologna, Pinacoteca). In 1621 Guercino was invited to Rome to work for Pope Gregory XV. His ceiling fresco, Aurora, was painted for the Pope's nephew (Rome, Villa Ludovisi).

On the death of the Pope, Guercino returned to Cento; he settled in Bologna, probably in 1644, after the death of Reni. His later work is more academic, closer to the manner of Reni, and lacks the bravura handling and chiaroscuro effects of his earlier paintings.