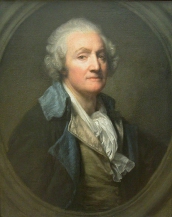 Jean Baptiste Greuze (1725 - 1805) was born in Tournus, sixth son of a master tiler. Legend has it that the young Greuze convinced his father of his natural aptitude for painting when he showed him a pen-and-ink drawing of Saint James, which his father mistook for an engraving. Greuze was sent to Lyon to study with the commercially successful portrait painter Charles Grandon (1691-1762). Sometime before 1755, Greuze left Lyon for Paris, where he went to pursue his studies at the Académie royale de peinture et de sculpture.

Very little is known of Greuze's early years in Paris. At first, he studied drawing at the Académie under Charles Joseph Natoire (1700-1777), although this master of the rococo style seems to have had little effect on Greuze's stylistic development. Greuze's earliest support came from two established academicians-Louis de Silvestre (1675-1760, named director of the Académie in 1752) and the sculptor Jean Baptiste Pigalle (1714-1785). The story of his successful acceptance to the ranks of the Académie foreshadows the painter's later defiance of academic protocol. Disgruntled by his disadvantageous placement in the drawing studio, Greuze demanded a better seat, even though he had not participated in the competitions by which the hierarchy of placement was normally determined. He was challenged to present an array of his works for evaluation. Silvestre, by then the director, found Greuze's offering so perfect that he was accepted on the spot and named associate member on June 28, 1755. That same year, Greuze's first Salon success included A Father Reading the Bible to His Family (France, private collection), The Blindman Deceived (Moscow, State Pushkin Museum of Fine Arts), A Child, Who Has Fallen Asleep on Top of His Book (Montpellier, Musée Fabre), and Portrait of Louis de Silvestre (Munich, Alte Pinakothek).

Through Pigalle, Greuze was introduced to Louis Gougenot, abbé de Chezal-Benôit (1719-1767), who would be rewarded with the title of honorary associate for his efforts to promote the young artist. From 1755 to 1757 Greuze traveled throughout Italy in the company of Gougenot. In Rome, he was given the privilege of lodgings in the Palazzo Mancini (seat of the Académie de France) through the goodwill of the marquis de Marigny (1727-1781) and Natoire, now director of the Académie de France. On his return to Paris, Greuze's popularity continued to grow with each Salon. One of his most celebrated works was The Marriage Contract (Paris, Musée du Louvre), exhibited at the Salon of 1761 and bought by the marquis de Marigny, a picture whose universal appeal assured Greuze's celebrity as the eighteenth-century innovator of paintings of sensibilité.

In 1767 the Académie royale admonished Greuze for failing to supply his long-awaited morceau de réception. Two years later he submitted Septimius Severus and Caracalla (Paris, Musée du Louvre) in an attempt to be accepted into the Académie in the esteemed category of history painting. He failed, however, and the ensuing fracas between the indignant Greuze and his unsympathetic colleagues over the rejection of this highly experimental attempt at Poussinesque history painting forever soured the painter's relationship with the Académie under the ancien régime. At about this time, Greuze's relationship with such influential supporters as Denis Diderot (1713-1784) and Pigalle also began to erode. Thereafter, Greuze refused to exhibit at the Salon, choosing instead to give private showings of his work at his studio during the season of the Salon.

Despite Greuze's difficulty with the Académie, his career continued to flourish. He could boast such high-placed patrons as Ange Laurent de La Live de Jully (1725-1779), the Empress Catherine II of Russia (r. 1762-1796), and the marquise de Pompadour (1721-1764). His defiance of the Académie did more than a little to enhance his reputation as rebellious genius, which, as a marketing tactic, served him well. A failure more damaging to the course of Greuze's career than his rejected morceau de réception was his marriage. In 1759, at the brink of his blossoming career, Greuze married Anne Marie Babuty, the daughter of a bookseller. Madame Greuze would prove to be a vindictive and treacherous partner. Her affairs with Greuze's sitters and students caused him both humiliation and loss of income. Their stormy marriage was legally dissolved in 1793, with Madame Greuze receiving a substantial settlement.

When in 1800 Greuze decided to exhibit his work once again at the Parisian Salon, his star had long begun to fade. Younger imitators such as his former pupil Pierre Alexandre Wille (1748-1821) and Nicolas Bernard Lépicié (1705-1784) had replaced Greuze in the eyes of the public as painters of sensibilité. In 1781 Jacques Louis David (1748-1825) had superseded Greuze's failed hybrid of genre and Poussinesque history painting with a more powerful version of his own, when he exhibited his Belisarius (Lille, Musée des Beaux-Arts) to critical acclaim. By the last decade of Greuze's life, taste had shifted definitively toward the neoclassical idiom. Financial mismanagement, the fall of the ancien régime, and a costly divorce left him nearly destitute. To survive, he turned to the kind of saccharine têtes de jeunes filles that have ever since tarnished his posthumous critical fortune. Tragically, on his death in 1805 at the age of eighty, the painter who had commanded some of the highest prices in France and abroad during the 1760s and 1770s was nearly penniless.

[Philip Conisbee, in French Paintings of the Fifteenth through the Eighteenth Century, The Collections of the National Gallery of Art Systematic Catalogue, Washington, D.C., 2009: 246.]