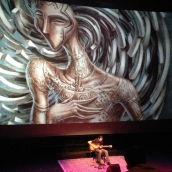 Farzad Golpayegani started to learn Painting and Graphics in the high school of Art. Style of his drawing and paintings are close to Surrealism and Expressionism. He has had several painting and drawing exhibitions so far.

He owes his passion to music, to his older brother. In 1994, when he bought his first guitar, he started to focus on music seriously. He got a teacher in his early learning but he's mainly self-taught. From the beginning, Farzad was so anxious about Improvise and self-experiences instead of performing other player's music.

Style of Farzad's Music is Iranian Progressive Metal and Fusion and traits of them are: technical playing of Electric Guitar (7-string) and Acoustic Guitar, use eastern tunings for Acoustic Guitar, mix Eastern, Persian and Classic music with Metal music, various atmosphere and progressive feel, various tracks on a same album & ...

Farzad composes, plays, records, mixes and masters the tracks and designs album covers by himself. He personally plays 7-string Electric Guitar, Acoustic Guitar, Bass Guitar, Violin and for the Percussions, Drums and keyboards he usually does computer programming. Also he has had other musicians in his songs.

Name of his tracks are only numbers which are in his track-list. The reason is the importance of musical concept against understanding under track name's influence.

Other than his own musical projects he also compose music for Advertisements, Video Games, Animations, Short Movies and...
more >
13