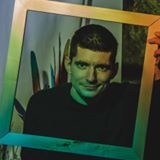 Born in 1988 in Sibiu (Romania), Alexandru Cînean graduated from the Arts Highschool in 2007. He undertake studies of painting at the University of Art and Design in Cluj-Napoca, where he earned in 2012 a BA and a MA. In 2008-2009, noted for the quality of his work, he was offered a stay in the Academia de Bella Arte in Torino in the European Erasmus project. He benefits again from this project in 2011 and decides to go in Belgium for 3 months (11/2011-02/2012) in the Thuin’s gallery (Antecedence/ Ephemere).
During his career, Alexandru Cînean made several exhibitions notably in Belgium, Romania, Italy and Australia. He also participated in some theatrical projects and received in 2009 a prize in the Concorso Nazionale di Pittura Morgese in Italy.
more >
3