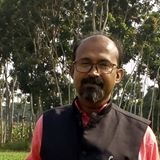 Katha o chobi
A story life biography with some paintings
By: Dhiman Bhattacharjee

South Kolkata
After 21 years of independence in a poor joint family a new member took birth, and his lovable grandmother gave him the name Dhiman which means a guy with knowledge. From the childhood days it was not always possible to buy milk always but tea and old bread had made everything perfect and that how naughty Dhiman grown up.
No matter that family was unable to provide Dhiman with colours but he had already head much forward with chalk, ink, and female feet colour known as ALTA. His mom uma devi was a born artist, and father was a talented, broad hearted human being. The first step to painting with the hand of his mother. Painting of flowers, birds which is been drawn on slate that is how Dhiman has stared steps to polish towards paintings. But still he asks himself that what is so painful in this world? At the age of 5 he hook up his first prize from his nearest club and the prize was a fountain pen. Many years he looked after that fountain pen. After many years passed he was not that much concerned about studies but he always stare outside the window of school premises and love to see the nature. Every teacher used to love him for his paintings. As because he always had a great passion towards painting so he quit the line of B.COM and took admission in academy of fine arts. With holding his seniors hands he always wanted to feel atmosphere of santiniketan so whenever he got chance he went there. The Sculpture by ramkinkar beij had made an impact on him and made him think of to paint about poor and hungry people because he was very hungry for painting. After that he totally change his subject and bring a new evolution of art, hence he stayed focused and upgraded himself. In the year 1996 6th dec Dhiman married to a pretty woman sumita. In the year 1999 19th nov they finally brighten up their life with their first son soumya. Year 2001 8th july Dhiman lost his father kumar ranjan bhattachrjee reason was cancer. Dhiman was totally shattered, he was totally clueless. His friends and relative use to think that Dhiman has lost. Day by day with his family he use to work for small companies but he hadn’t quit painting. 8th july 2008 dhiman joins his father’s job in a school as a clerical position. 2010 9th june Dhiman losses his first teacher of his painting life his mother uma devi.

In this shattered broken life sumita and soumya had fought with him without looking after hunger or demand. Dhiman still drawing his words and about poor people hunger and need, his dream is no matter what happens every child should not stay hungry and get established in his or her own way of artistic dream.

After these amount of fight Dhiman is still polishing his passion towards painting and he is still drawing no matter how much medical issues came. Highlighting this two of his painting are as follow:-

One day one friend of mine have asked that why I only draw nude human art work. I smiled and said open your sunglass first. A country where there is no food, no culture, and no education the people of that country are naked. We call ourselves intellectual and educated but we wear sunglass to hide these naked world. A famous poet of Bengal named kavi Sukanto Bhttacharjee written that “purnimar chand jeno jholshano ruti”. My this artwork is dedicated to sukanto bhattacharjee as he have said “purnimar chand jeno jholshano ruti”.

As the two teachers have done sexual torture with just 4 year old girl, this is the main example that we are wearing sunglass to hide this naked country.

2) Prostitute 2 –
At the time of slave trade whole world’s rich people and landlords buy them and make them slave. At that time many women has to face brutal situations and faced rape every night. From that that time they got a name that is prostitute. The job they does for that reason they has been hated by the population. One day this hate made them a real prostitute. Still today many prostitutes been seen on roads those who are hiding their naked pain with new clothes. In 21st century when the women are doctor, engineer, astronaut, prime minister or chief minister still now also they get poses by abusing languages which is equal to rape. For that rea
more >
8