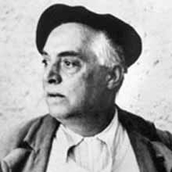 Carlo Carrà (February 11, 1881 – April 13, 1966) was an Italian painter and a leading figure of the Futurist movement that flourished in Italy during the beginning of the 20th century. In addition to his many paintings, he wrote a number of books concerning art. He taught for many years in the city of Milan.Carrà was born in Quargnento, near Alessandria (Piedmont). At the age of 12 he left home in order to work as a mural decorator.
In 1899–1900, Carrà was in Paris decorating pavilions at the Exposition Universelle, where he became acquainted with contemporary French art. He then spent a few months in London in contact with exiled Italian anarchists, and returned to Milan in 1901. In 1906, he enrolled at Brera Academy (Accademia di Brera) in the city, and studied under Cesare Tallone. In 1910 he signed, along with Umberto Boccioni, Luigi Russolo and Giacomo Balla the Manifesto of Futurist Painters, and began a phase of painting that became his most popular and influential.[Source]
more >
6