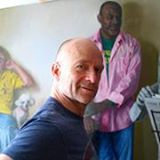 The Dutch painter Wim Heldens has taken-up a mimetic tradition and re-creates life in fantasized but psychologically ‘real’ images, handling oldfashioned craft. The past and the present meet in a personal synthesis, as expressive as real life narratives.

In 2011 Wim Heldens won the prestigious BP Portrait Award of the National Portrait Gallery in London with a rather introverted portrait of his (adopted) son. From that moment, his oeuvre found a wider response, and the originality and artistic qualities of his work became more visible. Heldens is a convinced realist painter, a genre which is currently emerging in public space as an alternative to concept art and abstraction. In the contemporary cultural framework, which has become more and more pluralistic, realism in the visual arts is increasingly taken seriously, after decennia of being criticized as ‘outdated’, ‘conservative’, ‘kitsch’ or simply ‘superfluous’ – since we have already museums full of realist art from former ages.

Aristotle developed, in relation to the nature of the arts, the concept of mimesis which is art as a ‘mirror’ of reality, in which universal human experience is shown through the micro cosmos of the work of art. From this concept, the classical notion of art as something to be studied for their beauty, meaning and expression was developed, a tradition which is still with us today. Mimesis is not imitation, but an ambiguous complex of meanings including imitation, expression, representation and imagination. A ‘mimetic’ work of art is not merely an imitation of reality, but an expression of the artist’s interpretation of reality, in which on one hand the universal and recognizable, and on the other the particularly individual, find a synthesis.
For more: http://www.wimheldens.com/article-post-modern-times/
more >
14