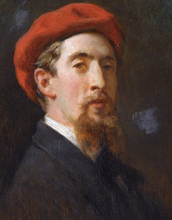 Eduardo Zamacois y Zabala was a Spanish academic painter who was born in Bilbao, Spain on 2 July 1841. He moved to Madrid in 1859, where he enrolled in the Real Academia de Bellas Artes de San Fernando and studied with Federico de Madrazo.

Eduardo Zamacois was born in Bilbao in 1841. At the age of twelve he entered the atelier of Joaquín Balaca to begin his artistic training, which he would later continue at the Higher School of Fine Arts of San Fernando in Madrid. During his stay in Madrid he worked as a copyist at the Prado. In 1860 his teacher Federico de Madrazo advised him to travel to Paris, where he would frequent the Louvre in order to copy the pictures by the old masters, and was accepted as a disciple of Ernest Meissonier.

He was the first artist to enjoy a scholarship from the Regional Government of Bizkaia and presented his work at the Parisian salons, to great acclaim. 1866 marked the onset of his relationship with Adolphe Goupil, thanks to whom he was able to sell his works on a regular basis. He met the most important painters, writers and intellectuals of the day, such as Léon Bonnat, Alexandre Cabanel and Alexandre Dumas fils at the city's art circles, and also became friends with Raimundo de Madrazo, Mariano Fortuny and Eduardo Rosales, with whom he travelled to Rome in 1868.

His ironic scenes painted with painstakingly refined brushstrokes have earned Eduardo Zamacois a reputation as one of the significant and renowned figures in European painting of the late nineteenth century. Zamacois returned to Madrid at the outbreak of the Franco-Prussian War, and died suddenly in 1871.
more >
3