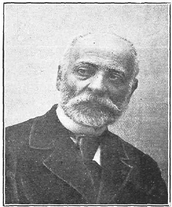 Descended from a family of merchants, he too turned to commerce at the end of his course of studies on Syros. In 1856 he was in Trieste where he worked as an accountant in the commercial house of his brother-in-law Georgios Afentoulis. During the same period, he began to do his first drawings on subjects related to the harbour and in 1864, at the urging of his employer and the financial backing of his family, he went to Munich where he began to study at the Academy of Fine Arts under Karl von Piloty.

His participation in the competition for the depiction of the naval battle of Lisse, announced by the Austrian government in 1866, garnered him first prize in 1867 for his drawings and a trip along the Adriatic in order to get to know the site of the naval battle. The following year the work was presented at the Artistic Exhibition of Vienna and was purchased by the Emperor Franz Joseph. In 1868 he began to take part in the exhibitions of the Artistic Society of Munich in which he also participated in 1869, 1872, 1873, 1877 and 1878 while in 1877 he exhibited the "Naval Battle of Trafalgar" in London, and the work was purchased by the British Ministry of the Admiralty.

In 1883 he returned to Greece and was appointed professor at the School of Fine Arts where he taught Elementary Graphics and Statue Drawing until 1903 when he retired for health reasons. At the same time he taught at the "Artistic Center", a painting school he had founded in Piraeus in 1895, where he had settled upon his return from Munich.

Continuing his exhibition activity, he participated in the exhibitions at the Melas House in 1881 and the Parnassos Hall, at the Olympia Exhibition in 1888, the International Exhibition of Athens in 1903, at which he won the silver medal, and at the International Exhibition of Bordeaux in 1907 at which he also won an award. Moreover, he presented the "Naval Battle of Salamis" at the Greek Court in 1883 and in 1889 was awarded the Silver Cross of the Savior.

Though he began with landscapes, Volanakis developed into one of the most important Greek seascape painters, depicting naval battles, scenes in harbors, ships and caiques, as well as important events taken from the social life of the time. His compositions, lyrical and atmospheric, are characterized by color harmony and a meticulous rendering of the details and reveal a study of the Dutch seascape tradition. In his landscapes can be found influences from the Barbizon School and the work of Corot and there are also reverberations of French impressionism.
source