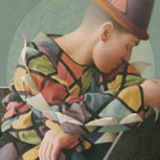 Jane Sercombe Lewis quietly but obsessively produces work which is oblivious to fashion, trends or movements. Known principally as a painter, she is also an accomplished draughtswoman and printmaker.

Her painting technique is in part influenced by the artists of the early Italian and Northern European Renaissance and visits to Italy to study the ancient Roman frescoes at Pompeii, Herculaneum and Ostia have had a profound effect. Her response to this ancient art is one of recognition of its startlingly contemporary resonance - a modernity of expression and application of paint which speaks directly across the centuries and which finds echoes in her own work. But while Jane’s own working methods and materials could be seen as traditional, the subject matter is wide-ranging, challenging and of its time.

Her aim is to produce technically immaculate paintings and graphic works which often contain subversive imagery, a paradox that at first seduces and then challenges the viewer. The human figures, animals and objects depicted convey a stillness and impression of time arrested - part of a personal, often surreal, narrative expressing an inner world and its relationship with an outer reality. More recently Jane’s work has been concerned with the tragic plight of animals in the modern world, and its direct relationship to the ongoing destruction of our environment and its sentient inhabitants.

Winner of the Slade Prize on graduation from the Slade School of Art UCL, on leaving college Jane was represented by Carol Mann, who was at that time an art historian and artist’s agent (later an author of books on art and on women’s politics). As a young artist, Jane showed regularly at the Curwen Gallery and other London galleries, worked for a while as a scenic artist for BBC Television, and went on to become a full-time assistant lecturer at the Slade School. She also taught at Watford, Harrow, Richmond (Surrey) and Leeds Colleges of Art and was a visiting lecturer at Reading University and Byam Shaw School of Art. An early turning point in her painting career was participating in the ground-breaking Women’s Images of Men exhibition at the ICA in London in 1980. Showing in the exhibition's sequel Pandora’s Box while at the same time pursuing a 12 month residency with Kent Opera in 1985, gave her work the wider exposure that enabled her to paint full-time and exhibit with the Nicholas Treadwell Gallery. In 1989 Kent Opera commissioned and published three paintings to commemorate their 20th Anniversary. She was later awarded a Fellowship in Drawing by the Henry Moore Foundation which attracted the attention of the Portal Gallery in London, where Jane exhibited from 1993 to 2013. More recently she has received funding from Arts Council England and the Oppenheim-John Downes Memorial Trust, and was commissioned by Standard Chartered Bank for their corporate collection. Jane’s work has been shown in solo and group exhibitions throughout the UK and also internationally. Paintings and prints are in a number of public collections and numerous private collections and she now shows regularly with the Nicholas Treadwell Gallery in Vienna, as well as occasionally exhibiting independently by opening her work-place Solitary Space Studio to collectors.
more >
62