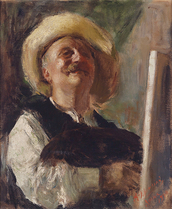 Mancini worked at the forefront of the Verismo movement, an indigenous Italian response to 19th-century Realist aesthetics. His usual subjects included children of the poor, juvenile circus performers, and musicians he observed in the streets of Naples. His portrait of a young acrobat in Il Saltimbanco (1877–78) exquisitely captures the fragility of the boy whose impoverished childhood is spent entertaining pedestrian crowds.
more >
10