The Städtische Galerie im Lenbachhaus was established in the former residence of the artist Franz von Lenbach in 1929. When his widow, Lolo von Lenbach, offered to sell the property to the City of Munich in 1924, her proposal included the donation of the building’s furnishings and interior decorations as well as numerous works by Lenbach. The acquisition of the Lenbachhaus made it possible to fulfill the desire for a municipal art museum, which had been widely felt for many years. The city’s art holdings, which were scattered across various municipal institutions, were united; municipal funding was used to expand the collection. To create enough floor space for the collection and exhibitions, the architect Hans Grässel added an extension to Lenbach’s studio and residence building, creating a three-wing complex. On May 1, 1929, the Städtische Galerie im Lenbachhaus opened its doors to the public.

The museum’s founding director, Eberhard Hanfstaengl, set the goal of bringing together Munich painting and contemporary art in a municipal art collection of European stature, but his plans were thwarted only a few years later, when the Nazis took power in 1933.

After Eberhard Hanfstaengl left to take a position in Berlin, the art historian and staunch Nazi Franz Hofmann led the Städtische Galerie from June 1934 to late 1937. He ensured that the collections of the young museum shrank by removing numerous works the Nazis vilified as “degenerate art.” After his departure, the position of director of the Städtische Galerie im Lenbachhaus remained vacant; the director of the Stadtmuseum, Konrad Schießl, served as its acting head. An art advisory council whose members were appointed by the Nazis determined all museum policies at the Lenbachhaus and controlled the acquisitions program.

In 1944 – 45, the museum suffered heavy damage, and large parts of the building were destroyed. After a period of rapid reconstruction, the first shows of the postwar era were held in 1947. Despite the museum’s limited funding, new works, especially by contemporary artists, were added to the collection.

On the occasion of her eightieth birthday on February 19, 1957, Gabriele Münter made an extraordinarily generous donation to the Städtische Galerie, giving the art of the Blue Rider, including eminent works by the artist herself, Wassily Kandinsky, her companion of many years, and their artist friends to the museum. The Lenbachhaus, which had been a municipal institution that primarily catered to local audiences, became a central venue for classical modernism and a world-class museum. In 1965, Bernhard Koehler Jr. donated his valuable holdings of paintings by Franz Marc and August Macke to the Lenbachhaus. An extension built between 1969 and 1972 added the necessary floor space for an adequate presentation. Four years after Gabriele Münter’s death, in 1966, the Gabriele Münter and Johannes Eichner Foundation, which holds considerable archival materials concerning the art of the Blue Rider group, became operative. In 1971, the Lenbachhaus also acquired the Kubin archive of the Hamburg-based collector Kurt Otte.

Over the years, acquisition funding provided by the city and the Gabriele Münter and Johannes Eichner Foundation enabled us to purchase eminent works by Paul Klee and by major representatives of the Blue Rider and other artists in its orbit. The collection now includes extensive holdings of outstanding works by the leading Blue Rider artists — first and foremost, Wassily Kandinsky and Gabriele Münter, but also Alexej Jawlensky, Marianne von Werefkin, Franz Marc, and August Macke.

Since the 1970s, the museum has held exhibitions that introduced audiences to central tendencies and protagonists of the international contemporary art scene. The purchase of Joseph Beuys’s show your wound in 1979 paved the way for a redefinition of the Lenbachhaus’s acquisition policies, after which the museum started adding national and international contemporary art to its collections. Since 1994, the Kunstbau, an exhibition space located above Königsplatz U-Bahnstation, in the immediate vicinity of the artist’s villa, has hosted large temporary exhibitions.

Planning for the refurbishment and redesign of the Lenbachhaus and the addition of a new wing began in 2003, and work on the site commenced in the spring of 2009. After a Europe-wide selection process, Foster + Partners architects were commissioned to develop a rehabilitation and redesign concept to create state-of-the-art facilities for an internationally renowned museum drawing large numbers of visitors. The renovated gallery with its new extension was inaugurated in May 2013. [source]
more >
11 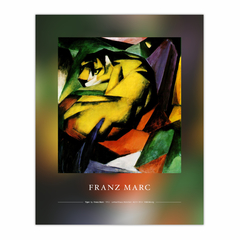