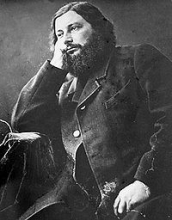 Jean Désiré Gustave Courbet (10 June 1819 – 31 December 1877) was a French painter who led the Realist movement in 19th-century French painting. The Realist movement bridged the Romantic movement (characterized by the paintings of Théodore Géricault and Eugène Delacroix) with the Barbizon School and the Impressionists. Courbet occupies an important place in 19th century French painting as an innovator and as an artist willing to make bold social statements through his work.
"I am fifty years old and I have always lived in freedom; let me end my life free; when I am dead let this be said of me: 'He belonged to no school, to no church, to no institution, to no academy, least of all to any régime except the régime of liberty." [Source]
more >
73