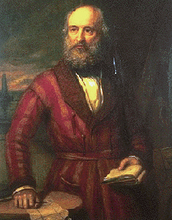 Charles Bird King was born in Newport, Rhode Island, the only child of Deborah Bird and American Revolutionary veteran Captain Zebulon King. The family traveled west, but when King was four years old, his father was killed and scalped by Native Americans near Marietta, Ohio . Because of the horrible death of his father, Charles and his mother moved back to Newport.

When King was fifteen, he went to New York to study under the portrait painter Edward Savage. At age twenty he moved to London to study under the famous painter Benjamin West at the esteemed Royal Academy. King returned to the U.S. due to the War of 1812 after a seven-year stay in London, and spent time working in Philadelphia, Baltimore, and Richmond.

He eventually settled in Washington, due to the economic appeal of the burgeoning city. In the nation’s new capital, the artist earned a solid reputation as a portraitist among politicians, and earned enough to maintain his own studio and gallery. King’s economic success in the art world, particularly in the field of portraiture, can be attributed to his ability to socialize with the wealthy celebrities, and relate to the well-educated politicians of the time: "His industry and simple habits enabled him to acquire a handsome competence, and his amiable and exemplary character won him many friends". These patrons included John Quincy Adams, John C. Calhoun, Henry Clay, James Monroe, and Daniel Webster. King’s popularity and steady stream of work left him with little reason or need to leave Washington. In 1827 he was elected into the National Academy of Design as an Honorary Academician. Despite his wealth and societal standing, the artist never married, and lived in Washington until his death on March 18, 1862. Upon his death, he bequeathed his collection of paintings, books, and prints to the Redwood Library and Athenaeum.

Though King’s legacy lies in his portraiture, throughout his career he also demonstrated a great technical skill in still life, genre, and literary paintings. Scholars have thought he would have preferred to focus on these styles throughout his career, but he needed to earn a living, and the only money to be made within the art market of the United States in the early part of the 19th century was in painting portraits. His inclination towards genre and still life paintings can be traced back to his seven-year stay in London. The 16th and 17th-century style attributed to masters in Northern Europe, especially that of the Dutch and Flemish, was quite popular in the upper echelons of the art culture. While attending the Royal Academy, King was swayed towards the Dutch styles by the demand such works commanded, and also was able to see the works and learn from them. It is likely that through his schooling, he was able to study the British royal collection, as “Prince of Wales, and Regent, George IV collected Dutch art voraciously…” and the prints were the favored style at the time by other members of European royalty.

King took more than stylistic cues from these examples, as he also employed some of the techniques which he saw. As Nicholas Clark wrote in 1982, King “sometimes relied upon Dutch prints for formal solutions", as the prints provided a source of valued composition. As King’s formal education included seeing revered art from the Netherlands and surrounding regions, and many of his paintings include features that indicate influence of Dutch art, the artist may be seen to have derived his favor for genre and still life paintings from this style. As noted above, King incorporated the techniques of Dutch painting into his portraits, though he recognized that the United States was not yet as familiar the references to the style as it would be in the sphere of “post-Civil War materialism…".

Beyond his specific connection to Dutch painting, King is known to have been especially committed to staying within the confines of the traditional style of painting which he learned in his youth: “it is apparent that the artist would adapt, time and again, traditional European mannerisms to his new and native subject matter”.

While King completed a number of paintings that invoked Dutch painting technique, he is better known as an important figure in the 19th-century United States art world for his numerous portraits of Native Americans, commissioned by the federal government. He was also commissioned by the government for portraits of celebrated war heroes, and privately by the political elite, all to portray important men before the time of photography. Despite his popularity at the time, King is often overlooked in the broad scope of art history when placed amidst the talent of his contemporaries. His relative obscurity may be due in part to his lack of innovation in his work. It is also due to the loss of most of his numerous Indian portraits to a fire in the Smithsonian; his work simply disappeared, so he was overlooked in succeeding generations.

The Smithsonian art historian Herman J. Viola notes in the preface to The Indian Legacy of Charles Bird King that he compiled the book in order to acknowledge the importance of King, as well as his Native American subjects, as part of the creation of a federal collection of Indian portraits. The government, private collectors, and museums hold portraits by a number of talented United States’ painters, including George Catlin, James Otto Lewis, and George Cooke. King’s work makes up a bulk of the Indian portrait collection, with more than 143 paintings done from 1822 to 1842.

Thomas McKenney, who served as the United States superintendent of Indian trade in Georgetown and later as the head of the Bureau of Indian Affairs, initiated the government's commissioning of the portraits. Like many others, at the time he believed that the indigenous people were nearing extinction, and he was seeking ways to preserve their history and culture. He first tried to collect artifacts from various tribes, then thought of having portraits painted for the government. About this time, he met King, whose talent he appreciated. “The arrival of Charles Bird King on the Washington scene inspired the imaginative McKenney to add portraits to his archives.” King painted the subjects in his own studio, as McKenney easily obtained the consent for the portraits from Native American leaders coming to Washington to do business with the US through his new department. King’s 20-year role in painting works for the collection was profitable for the artist. He charged at least $20 for a bust, and $27 for a full-figure portrait, allowing him to collect an estimated $3,500 from the government.

The portraits gained widespread publicity beyond Washington during this period as McKenney broadened his project by publishing a book on Native Americans. In 1829 he began what would become many years' worth of work on the three-volume work, History of the Indian Tribes of North America. The project featured the many portraits of Native Americans, mostly King's, in lithograph form, accompanied by an essay by the author James Hall.

After the administration changed and McKenney left the BIA, the agency donated the Native American portrait collection to the National Institute, but shoddy care and shoddy displays kept it from the public eye.[6] When the National Institute deteriorated, it gave its work in 1858 to the Smithsonian Institution.[6] King's portraits were displayed among similar paintings by the New York artist John Mix Stanley, in a gallery containing a total of 291 paintings of Native American portraits and scenes. On January 24, 1865 a fire destroyed the paintings in this gallery, though a few of King’s were saved before the flames spread. Representations of many of the lost paintings have been found in McKenney’s lithograph collection that supported the book. 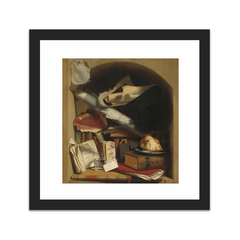