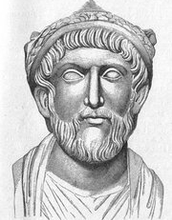 ~~~~~~ATTENTION I AM NOT THOMAS' FRIEND~~~~~
I was Roman Emperor from 361 to 363, as well as a notable philosopher and author in Greek.I was member of the Constantinian dynasty, Julian became Caesar over the western provinces by order of Constantius II in 355 and in this role campaigned successfully against the Alamanni and Franks. Most notable was my crushing victory over the Alamanni in 357 at the Battle of Argentoratum despite being outnumbered. In 360 in Lutetia (Paris) I was proclaimed Augustus by his soldiers, sparking a civil war between Me and Constantius. Before the two could face each other in battle, however, Constantius died, after naming me as his rightful successor. In 363, I embarked on an ambitious campaign against the Sassanid Empire. Though initially successful, I was mortally wounded in battle and died shortly thereafter.
more >
3