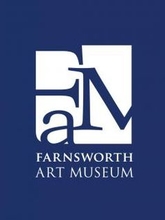 The museum's mission is to celebrate Maine's role in American art. It has one of the nation's largest collections of the paintings of the Wyeth family: N.C. Wyeth, Andrew Wyeth, and Jamie Wyeth. The museum owns and operates the Olson House in Cushing, inspiration for Andrew Wyeth's Christina's World painting. The museum also owns the Farnsworth Homestead, the Rockland home of its founder Lucy Farnsworth.

The museum's building was built in 1948 to designs by Wadsworth, Boston & Tuttle of Portland. [source]
more >
1