Olivier Lamboray: At a Crossroads between Reality and Illusion

In the 21st century the term environmental art has become a key feature in the creative world, producing a unique platform to showcase the state of nature to a diverse audience. Artists since the 18th century have had a deep fascination and an appreciation for nature and its creatures, now they have a desire to face current social issues and push change through thought-provoking art. Belgian internationally award-winning surrealist painter, Olivier Lamboray approaches art with a peaceful and dream-like state, where he constantly questions the meaning of reality. Lamboray uses this technique to criticise the current modern mass culture and the detachment from nature in some of his paintings, using Paris as the backdrop. 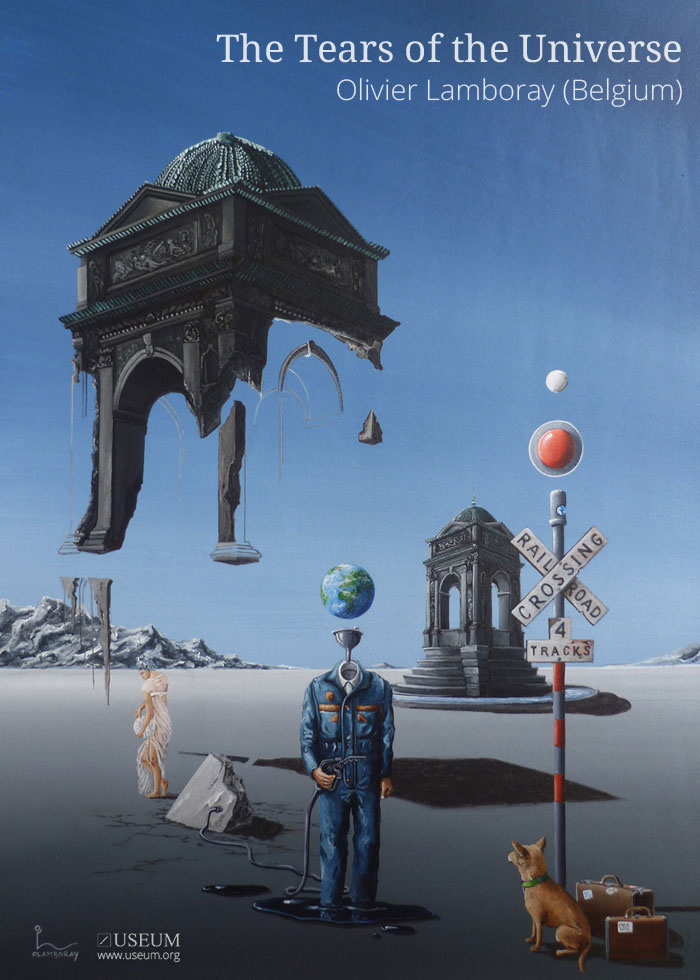 Consumerism, driving society to focus on consuming goods and services in order to increase their self-esteem, has without a doubt become a pressing issue. Not least due to its many psychological effects on the individual, through the destruction of the true self and its replacement with a false self, in other terms Narcissism. The definition in a dictionary of Narcissism is ‘A psychological condition characterized by self-preoccupation, lack of empathy, and unconscious deficits in self-esteem. Erotic pleasure derived from contemplation or admiration of one’s own body or self, especially as a fixation on or a regression to an infantile stage of development’.

The theme of detachment and illusion of the world arises in Lamboray’s painting Les Larmes de l’Univers (The Tears of the Universe), inspired by the Fountain of the Innocents in Paris. The monument was built on the occasion of French king Henry II’s entry into Paris in 1549. In the painting there are two versions of the fountain: one in the background, in its full glory, and another floating in the air slowly vanishing. One would assume that this represents the world entering into destruction, due to a constant dissatisfaction and urge for all things materialistic. Lamboray’s dog, Laly represents the animal world unable to speak out on the constant erosion of the planet. Instead he observes the figure at the centre of the painting squeezing the earth through a funnel, extracting its natural resources whilst sinking into the waste he has produced.

The process of pollution, if continued, will lead to a barren world, and as such we are all at a cross-road where important changes in direction need to be made. Instead, Lamboray believes that there is a widening gap between an illusory world of fun and the truth of a grim existence. The more we deny our bleak future, the closer we approach the disappearing fountain with its consequences. 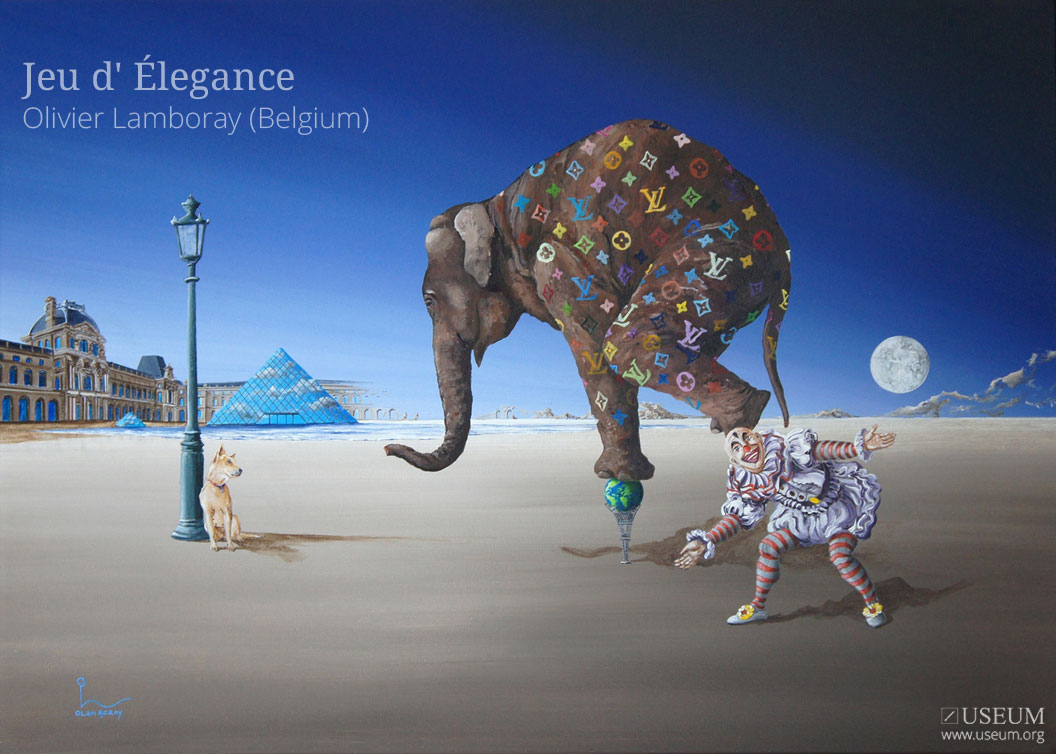 The theme is explored further in Jeu d’ Élégance (Game of Elegance), with the image of the Louvre in the background signifying the richness of culture in Paris. Yet again Laly watches how modern culture has become unsustainable. The clown is performing a trick, where an elephant printed in Louis Vuitton logo is balancing on the world with the Eiffel Tower beneath it. A magic trick that conceals the truth behind the abuse we place on the earth and its creatures. With increasing power of advertising and social media, humans are encouraged to dive deeper into narcissism and an ever growing insatiable demand for materialism.

Olivier Lamboray has produced an innovative way to alert and inform us of our detachment from nature and evaluate our morals. Leaving us with the question, can we create a balance between nature and civilization?