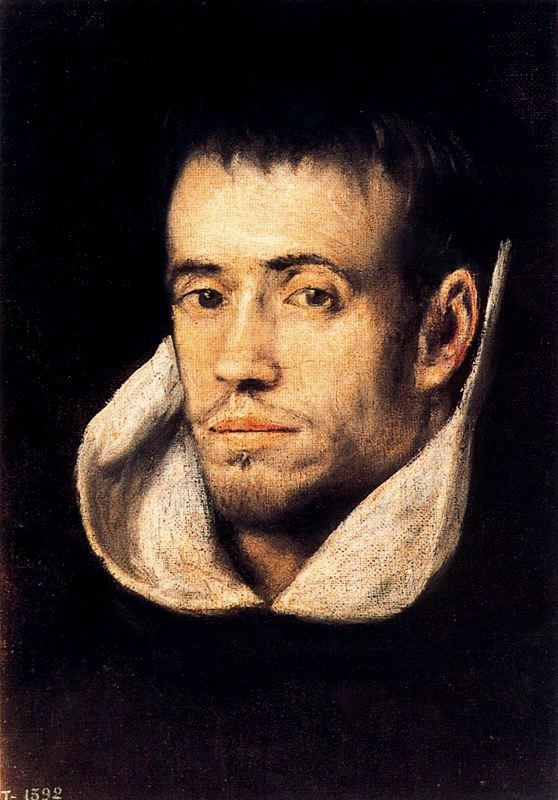 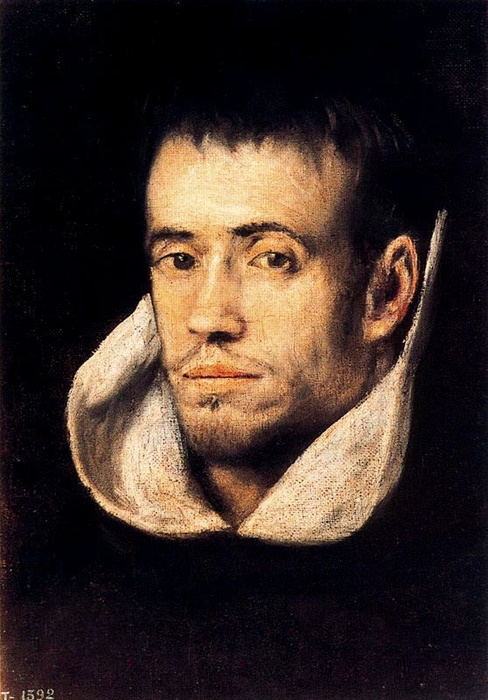 Portrait of a Trinitarian Friar

1600 - 1650
The head of a young man wearing white sackcloth under a black cape -the colors of both Trinitarian and Dominican habits- his thin face and raw cheeks are presented in a three-quarters view, with an intense frontal lighting that emphasizes them against the dark brown background. His light, almond-shaped eyes are topped by arched eyebrows on a wide, bare forehead and short, thinning hair with a touch of gray. His thin sideburns are accompanied by the beginnings of a mustache and goatee. In 1902, this portrait was part of the first monographic exhibition dedicated to El Greco, since then, the model has been identified as friar Juan Bautista Maíno. That painter from Pastrana who joined the Dominican order in 1613 after returning from a long stay in Italy, has erroneously been considered a disciple of El Greco by some authors. The idea that this portrait is by El Greco would thus require it to be one of his late works, and that proposal has generally been maintained, although with significant nuances. Despite the fact that the identification of the model as Maíno has been accepted in some quarters, there do not seem to be sufficient elements to support it. Cossío rejected it, as he considered the friar a Trinitarian. The painting is resolved in a manner similar to El Greco’s late works, with a vibrant modulation of ochers, grays and oranges that vividly shape the figure’s face, but a careful study of his head reveals the differences between it and works by the master’s hand. The right side of the face is profiled with a thin, dark line which could resemble the black contours that El Greco used to determine the placement of his figures. The master applied those contours directly over the priming, the characteristic reddish chestnut color that emerges in all his works, especially in the background and in areas of clothing. But in the present portrait, the line is not used to determine placement at the beginning of the pictorial process. Instead, it is an imitation applied to the painted surface, over the ocher flesh tones. It is gray, rather than intensely black like El Greco’s, and it is quite blurry, lacking the forceful resolution visible in the master’s portraits. Equally unconvincing are the small red brushstrokes on the model’s ear. In El Greco, those finishing touches were applied over the ochers and pinks to specify and shape certain areas of the face, as can be seen in his Portrait of a Gentleman (P810). Here, they seem to be yet another simulation of the technique employed by the master and his workshop (Text drawn from Ruiz, L.: El Greco en el Museo Nacional del Prado. Catálogo razonado, Museo Nacional del Prado, 2007, pp. 257-258).