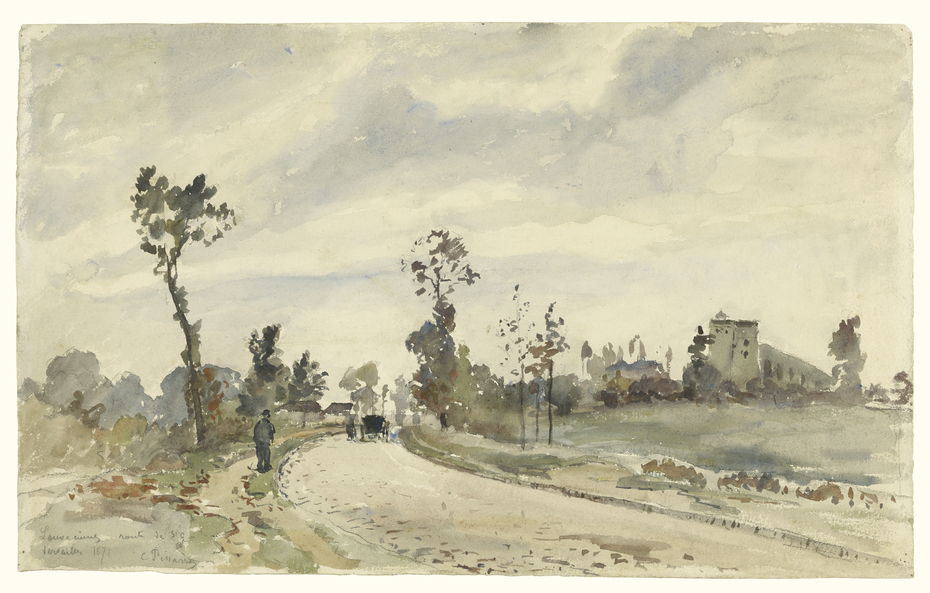 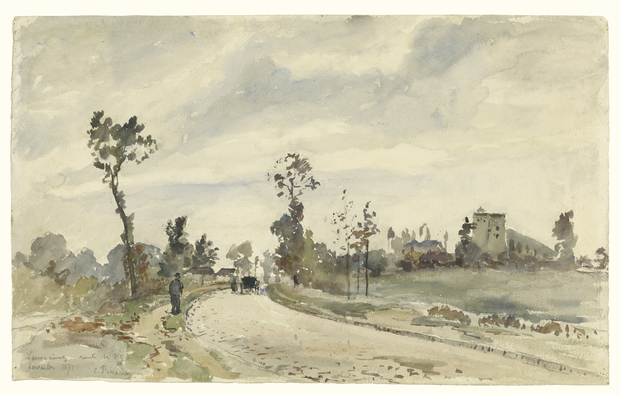 1871
As much as a specific location, this large watercolor represents a particular season. The palette of muted browns, blacks, greens, and blues create an autumnal landscape. The pale blue-gray sky, streaked with clouds, and the sparse foliage, both on and fallen from the almost bare trees, also convey winter's approach. A single figure and, in the distance, a figure and carriage, move along the desolate road curving through the scene.

Camille Pissarro's landscape shows the road to the town of Saint-Germain-en-Laye from Louveciennes, a village west of Paris. Many of Pissarro's landscapes of the early 1870s show the roads into and out of Louveciennes. Pissarro himself lived intermittently in Louveciennes and was part of a close-knit community of landscape painters who lived or traveled there including Claude Monet, Alfred Sisley, and Pierre-Auguste Renoir.

During the early 1870s, Pissarro began experimenting with the emerging Impressionist painting style by returning to watercolor, a medium he had used as a student during the 1850s. Using black chalk, Pissarro first indicated the main features of the composition. He then fleshed out the scene by covering almost the entire sheet with watercolor. Pissarro experimented with some of the spontaneous effects of watercolor, allowing it to pool and tide in some areas and applying it more evenly in others to create a diffuse light. He used broad, wet strokes to define the sky and smaller strokes, with more pigment on the brush, to articulate the foliage and figures.

Also in the Getty's collection, the painting Houses at Bougival (Autumn) was made by Pissarro about one year before this drawing. Although they depict similar subjects, the two works explore different effects. Here, the artist focuses on the fleeting atmospheric effects of light and air; in the painting, Pissarro places more emphasis on the geometric properties of the houses in the landscape.