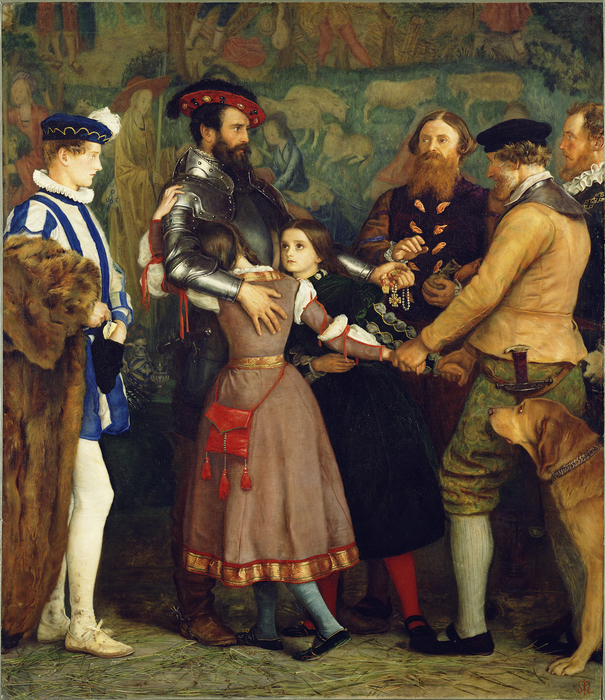 1860 - 1862
Standing on the right, a kidnapper firmly grasps the arm of a young girl while an armored knight tries to hand over precious jewels. In this theatrical painting, John Everett Millais depicted a sixteenth-century scene of a father paying ransom for his two daughters.

The subject matter and technique are typical of the Pre-Raphaelite movement founded by Millais. Although he wanted to express a moral seriousness in his work, the drama is unconvincing: the figures are stiff and too large for the room they inhabit. The Ransom received criticism of this kind when it was exhibited, but no one could find fault with Millais's painting technique. The sharp, near-photographic rendering of objects, materials, and individuals display Millais's technical brilliance.

Millais's painting was a group effort of sorts. His mother made and designed the costumes, his friend Mr. Miller posed for the head of the knight and he drew the body from a gigantic railway guard named "Strong." The girls were painted from one model, Miss Helen Petrie, and Major McBean posed as one of the kidnappers. The artist, however, did not much care for the painting and referred to it as "the picture with the dreadful blue-and-white page in the corner."

License:
Courtesy of The Getty
For more:
http://www.getty.edu/art/collection/objects/616/john-everet…