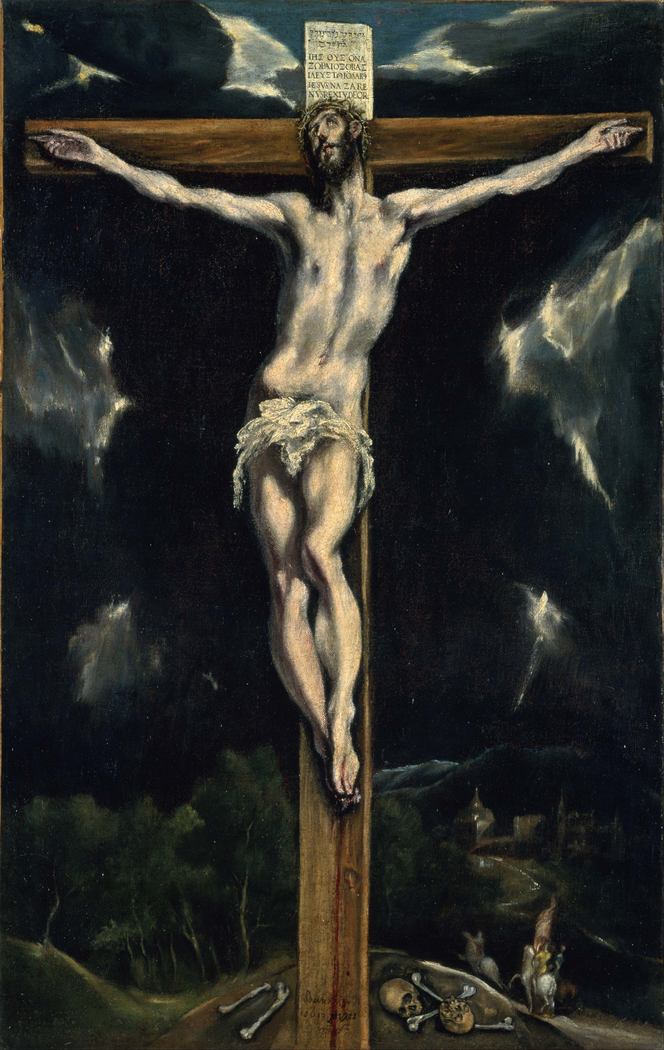 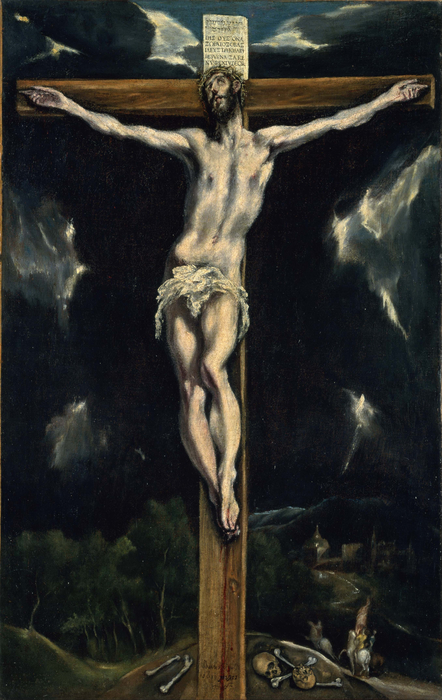 El Greco created a number of Christ on the Cross paintings throughout his life. Many examples of the type seen here with its dramatic background filled with black, roiling clouds, can be found amongst the works of both El Greco and his followers. The background motifs, namely the combination of figures on horseback and buildings, were rendered in various different combinations. In all instances, however, the figure of Christ is shown in elongated form, and the elegant curve of his body along with his facial expression reveal more religious ecstasy than suffering. The church seen on the distant hill is San Lorenzo Monastery, constructed in El Escorial by Phillip II. The selection of this background element is particularly fascinating given that El Greco was estranged from Phillip II and was not commissioned by him to participate in the decoration of that monastery. Paintings of Christ on the Cross by El Greco with the same depiction of the figure of Christ and background exist in many large and small variations, located today throughout the world. One of these works, a large-scale image today in the Cleveland Museum of Art, is particularly impressive. However, the Cleveland image background shows only the tops of a forest and the tower of San Lorenzo Monastery, without any inclusion of the figures on horseback riding up a hill or skull and bones. These factors indicate that the Cleveland work was not the model for the NMWA work. This painting was created sometime after El Greco's arrival in Spain, when he had switched from his more corporeal images to an elongated, thin human proportion, a stronger flow to his curving lines and his almost impressionistic, rough brushstrokes. Given these various characteristics, this work can probably be considered a late period work, although it is quite hard to definitely confirm that the painting is by El Greco himself. It is clear that the fluttering drapery of Christ's loincloth is not by El Greco himself, and there is a dryness about the other brushwork overall that differs from another high-quality small-scale version (Ex-Gutzwiller Family, Paris). Further, there is some loss of sharpness in the expression of the background sky, an area in which El Greco excelled. If El Greco's hand is apparent in this work, it is only a bit, and overall the work should be considered a high-quality workshop production. Further research is needed on this question of attribution. (Source: Masterpieces of the National Museum of Western Art, Tokyo, 2009, cat. no. 23)