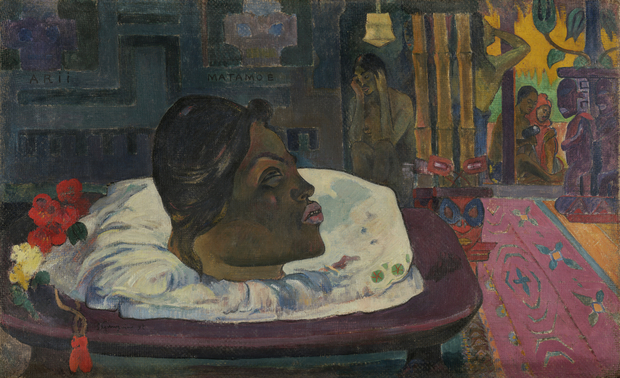 1892
I have just finished a severed kanak [Pacific Islander] head, nicely arranged on a white cushion, in a palace of my invention and guarded by women also of my invention.
--Paul Gauguin

Writing to his friend Daniel de Monfreid, Paul Gauguin referenced in an almost offhand way this startling painting of a decapitated human head, which he made during his first stay in Polynesia in the early 1890s. Real events, from Tahitian King Pomare V's death soon after Gauguin's arrival, to the artist having witnessed a public execution by guillotine several years earlier, likely influenced its dark subject matter. Gauguin added the Tahitian words "Arii" and "Matamoe" in the canvas' upper left. The first means "noble;" the second, "sleeping eyes," a phrase that implies "death."

The notion of a human head ritually displayed in an ornate interior suggests the formality of a ruler lying in state, supported by the presence of sorrowful figures in the background. However, this scene doesn't correspond to actual accounts of Pomare V's funeral because the body wasn't decapitated. Gauguin was just as apt to fantasize about life in Polynesia as he was to document it. Bright reds, yellows, and pinks are juxtaposed with muted browns and purples to evoke a tropical sensibility. The rough, burlap-like canvas also hints at an exotic "primitivism." In his collage-illustrated book Noa Noa--which he began after his first trip to Tahiti--he included a copy of this painting and a comment that he thought of Pomare's death as a metaphor for the loss of native culture due to European colonization.

Symbolist artists, including Gauguin, had a predilection for images of decapitated heads and any associated figures, such as Orpheus and John the Baptist. But in a more general sense, Gauguin also freely mixed Eastern and Western imagery. His obsession with the theme of death, which appears throughout his Tahitian paintings, is less a reference to spiritual beliefs or to what he saw around him than perhaps more significantly, how he viewed himself. Gauguin thought of himself as a martyr victimized by modern society, which compelled him to escape to a "primitive" culture.