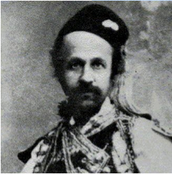 Theophilos Hatzimihail or Theofilos Kefalas, as his real name was, was one of the most famous Greek folk painters of Neo-Hellenic Art. He was mostly known with his first name, Theophilos.

He was born at Varia, very close to Mytilene, City of Lesvos Island, somewhere in between 1868 and 1971. He was the first of the eight children his father Gabriel Kefalas and mother Penelope had. His father was a shoemaker and his mother the daughter of a holy painter (iconographer). He wasn’t a good student at school because he was a slow-learner and also left-handed, something that was considered to be a serious disadvantage at that time. His parents pushed him to learn and tried to make him right-handed, things which made him a loner and turned him towards painting. At a very young age, somewhere between 15-20 (some say 18), he abandoned his family to go to Ismir (Smyrna), where he stayed for a few years as a gate-keeper at the Greek consulate. In the same time he painted and adopted his own style painting themes from ancient Greece and the Byzantine years.

After the breakout of the Greek – Turkish war in 1897, he attempted to join the army, with no luck, and settled in the city of Volos, a center of agriculture and industry at the time, where he stayed there for 30 years. He left there a large amount of paintings; he drew on walls, doors and windows of taverns, coffee places, bakeries, olive presses, mills, as well as houses.
Unfortunately a lot of his work has been lost or destroyed. He lived in poverty and painted for as few as possible, many times for a plate of food. His unusual dress code as well as his weird behavior put him in the middle of mockeries and jocks. He used to dress up as a tsolias (a nickname that was also given to him), wearing the traditional Greek skirt (kilt) and carried an old curved yataghan on his side. His financial situation got a bit better after Giannis Kontos, a rich landholder of Magnesia region, assigned him to paint the murals of his house in 1912. There, in Anakasia, Theophilos painted scenes from the Greek War of Independence in 1821, ancient Gods and sceneries. Today that house is the Theophilos Museum in Volos.
In 1927 he returned to Lesvos, back to his hometown in Mytilene, not being able to stand all that mockery against him any more. Rumors say that he left Volos because of an incident that happened while he was painting in a coffee shop; someone threw him down from a ladder. A year later he made acquaintance with the critic and art dealer Stratis Eleftheriades – Teriade, who contributed in improving Theophilos living conditions. He was the one who made him famous as much in Greece as abroad. He bought his colors, brushes and rags and sent to Paris everything he painted. At that time Theophilos changed his themes, he replaced the historical and heroic faces with familiar, everyday faces.
Theophilos was found dead in his chambers on March 24th 1934, possibly from food poisoning. A year later Eleftheriades – Teriade organized an exhibition of his works in Paris, in order to be known as a folk painter of Greece. A series of articles and interviews were given by well known authors and intellectuals about Theophilos and his work. Takis Barlas refers to him as “Papadiamantes of painting” and George Seferis correlated him with Makrigiannis, in 1947 at the British Council in Athens, where an expedition with his paintings occurred. A great artist, La Corbusier wrote in his article “… a painter born from the Greek scenery. Through Theophilos lies the landscape and the people of Greece. Red dust, pine and olive trees, the sea and the mountains of the Gods, people who calmly sit under the sun…”

On June 3rd 1961 Theophilos “goes” to Louvre in a big retrospective exhibition. Odysseus Elytis wrote “As I was returning from America, in June of 1961, I stopped in Paris for a few days and as I was wondering around the streets there, the first thing I saw in a window display of a bookstore I used to visit, was a big poster of the exhibition o Theophilos that had just started that week in Louvre. My heart started pouncing hard. Yes! There is justice in this world.”
Stratis Eleftheriades – Teriade funded in 1964 the establishment of Theophilos Museum in Varia, Lesvos. The museum consists of 86 paintings, from the last period of his work, belongings of Teriades’ private collection, who donated them to the City of Mytilene. Since 1965 the museum is open to the public, in between a large olive grove.
source
more >
7