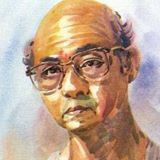 A computer engineer for almost three decades, Teo Kim-Liong returned to art full-time in 1994. Since then, besides Singapore, he has residenced in China, North American countries, Western, Central and Eastern Europe, and the Baltic, as a fulltime artist, and has held a total of nine solo exhibitions in these countries. He has blended the traditions of the East and the West, and emerged with a style that is distinctively his own. International critics commented that his works are "full of luminosity and feelings".