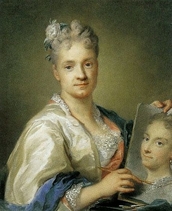 Rosalba Carriera (12 January 1673 – 15 April 1757) was a Venetian Rococo painter. In her younger years, she specialized in portrait miniatures. Carriera would later become known for her pastel portraits, helping popularize the medium in eighteenth-century Europe. She is remembered as one of the most successful women artists of any era.

Carriera was born in Venice to Andrea Carriera, a lawyer, and Alba Foresti, who practiced embroidery and lace making.[4]: 27–28  With her mother and sisters, Rosalba engaged in lace-making and other crafts. Her reasons for establishing her own studio as an artist remain unknown. An early biographer, Pierre-Jean Mariette, suggested that when the lace industry began to falter, Carriera had to find a new means of providing for herself and her family.

The popularity of snuff-taking gave her an opportunity. Carriera began painting miniatures for the lids of snuff-boxes and as independent works. She was among the first painters to use ivory instead of vellum as a support for miniatures.  Soon she also began producing portraits in pastel. Prominent foreign visitors to Venice, young sons of the nobility on the grand tour and diplomats for example, sought out her work. The portraits of her early period include those of Maximilian II of Bavaria; Frederick IV of Denmark; the "Artist and her Sister Naneta" (Uffizi); and August the Strong of Saxony, who acquired a large collection of her pastels.

By 1700, Carriera was already creating miniatures and by 1703 she completed her first pastel portraits.[7] In 1704, she was made an Accademico di merito by the Roman Accademia di San Luca, a title reserved for non-Roman painters.

Between 1720 and 1721, Carriera worked in Paris, where her work was in great demand. While in Paris, Carriera was a guest of the great amateur and art collector, Pierre Crozat. She painted Watteau, all the royalty and nobility from the King and Regent downwards, and was elected a member of the Academy by acclamation.[8][9] Her brother-in-law, the painter Antonio Pellegrini, married to her sister Angela, was also in Paris that year. Pellegrini was employed by John Law, a Scottish financier and adventurer, to paint the ceiling of the Grand Salle in Law's new bank building.

Carriera's other sister, Giovanna, and her mother, were members of the party in France. Both sisters, particularly Giovanna, helped her in painting the hundreds of portraits she was asked to execute. This was because she undertook a lot of work in order to support her family. Carriera's diary of these 18 months in Paris was later published by her devoted admirer, Antonio Zanetti, the Abbé Vianelli, in 1793. Her extensive correspondence has also been published.

In the short time she spent in Paris, Carriera's work contributed to forming the new aristocratic tastes of the court and by extension, the tastes of Parisians. No longer did art serve only the monarchy's needs. Her freedom, colorfulness and charms were injected into the Rococo style (which she was the face behind) which soon dominated the arts. Despite her triumph in Paris, she returned to her home in Grand Canal, Venice in 1721. Carriera, with her sister Giovanna in tow, visited Modena, Parma, and Vienna, and was received with much enthusiasm by rulers and courts.

In 1730, Carriera made a long journey to the royal court in Vienna, Austria. While there, Holy Emperor Charles VI became her benefactor and was fully committed to supporting her work. The Emperor amassed a large collection of more than 150 of her pastels. In return, the empress worked underneath her and received formal artistic training. The works she executed there were later to form the basis of the large collection in the Alte Meister Gallery in Dresden.

After her sister Giovanna's death in 1738, Carriera fell into a deep depression which was not aided by the loss of her vision (which might have been damaged by miniature painting in her youth) some years later. She underwent two unsuccessful cataract surgeries but ended up losing her vision completely. She outlived all her family, spending her last years in a small house in the Dorsoduro district of Venice, where she died at the age of 84.

Carriera's mother taught her the art of lace making. Her training as a portraitist remains undocumented. It is possible that she studied with Antonio Lazzari, Federico Benecovich, and Giuseppe Diamantini. She may also have been associated with Antonio Balestra, whose work she copied. There is speculation that the French painter Jean Steve encouraged her to make miniatures on ivory for the lids of snuffboxes, and that she received instruction in oil technique from Diamantini.

Carriera shared her talents with her sisters Giovana and Angela and later in life had female students such as Marianna Carlevarijs, Margherita Terzi and Felicità Sartori.

Carriera's influence would spread widely among many. In 1720 she provided King Louis XV with a portrait that completed the transition from the previously accepted style of the court. It was a shift between what looked powerful and a decorative style with international appeal.[10] She revolutionized the world of technology by binding colored chalk into sticks, which led to the development of a much wider range of prepared colors. This expanded the availability and the usefulness of the pastel medium.

Although negatively dubbed ‘The Rococo’ by Maurice Quai, a follower of the neoclassicist Jacques-Louis David, Carriera played an important role in popularizing the style in France and later England, where George III was a major collector of her work.

Despite her renown and contribution to an established manner, Carriera is "often treated as an exception, a rarity as a woman artist"[15] and very often ignored. When the Rococo went out of fashion, Carriera's name and her impact was dismissed and that had very much to do with gender as well.

Carriera was the first female painter to initiate a new style in the art community. The Rococo style emphasized the use of pastel colors; spontaneous brush strokes, dancing lights, subtle surface tonalities and a soft, elegant and charming approach to subject matter. She was known for dragging the sides of white chalk across an under-drawing of darker tones to capture the shimmering texture of lace and satin. She was also able to highlight facial features and the soft cascades of powdered hair. Because of her, artists created work in the style for nearly a century.

Carriera had many patrons who were interested in her work. Her earliest known pastel portrait depicts the collector Anton Maria Zanetti (1700) who procured many works by the artist and promoted her to other collectors when he travelled throughout Europe. Joseph Smith was another one of her admirers and he too collected a great amount of her works. King George III later purchased these pieces in 1762. That collection contained one of many of her self-portraits.

Her best-known self-portrait is one she contributed to the Medici collection of self-portraits at the Uffizi Gallery in Florence. This piece was different because she veered away from idealizing herself, as was a custom of the era. Instead, she was brusque and honest in her representation, featuring a larger nose, thin lips and a deep dimple in her chin. She holds a portrait of her sister and assistant Giovanna, whom she was very close to.

Her self-portrait work diverges from typical expectations of women artists of the time by aiming for an unvarnished appearance. One such example is Self-Portrait as an Old Woman (1746), whose mismatched eyes hint at the eye problems which plagued her in later life.

Carriera was not just a portrait painter, even though that was her subject matter of choice due to her profession. She also created a few allegorical pieces, including ‘The Four Seasons’, ‘The Four Elements’ and ‘The Four Continents’. These allegories were represented by beautiful, nymph like and barely clothed women holding symbols that referenced the meaning of the piece.