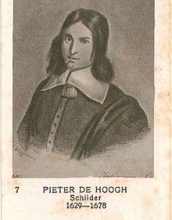 Pieter de Hooch (1629-in or after 1684) was born in Rotterdam. He served his apprenticeship under Ludolph de Jongh in Rotterdam and later under Nicolaes Pietersz Berchem in Haarlem. In 1655, he registered with the artists guild in Delft as an independent painter. Like many artists of the time, De Hooch also had a second trade: he worked for a cloth merchant. As an artist, De Hooch mainly painted figures in domestic settings. A characteristic element in many of his paintings is a view of a room or yard through an open door or window. As was usual in Dutch genre painting, his interiors often conveyed a moral message. When De Hooch moved to Amsterdam in 1661, his style became more elegant and profuse. His son Pieter, who was also his pupil, died at Amsterdam’s mental asylum in 1684. When De Hooch himself died is unclear; his last dated work is from that same year, 1684.