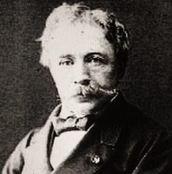 In 1851 he made his debut at the Paris Salon and, while he tried to stay in the mainstream, his art was heralded by those who were looking for a change to more realism.

In 1852 he married Marie-Isaure (d. 1860), the daughter of the director of the Brussels Observatory, and moved to Antwerp where he lived from 1852 to 1856; it was during this period that his fortunes began to improve.

In 1856 he and his family moved to Brussels where he became a prolific artist, specializing in scenes along the Scheldt. He exhibited a number of works at the Exposition Universelelle of 1867 and the critic Burger-Thoré described him as one of the greatest marine painters of the time.

In 1868 he became a member of the Société Libre des Beaux-Arts, a society founded on 1 March 1868 to help promote the works of artists who were interested in their individual interpretations of nature. He was a frequent exhibitor at the many exhibition halls in Europe and exhibited many pieces at the Paris Salon. [source]
more >