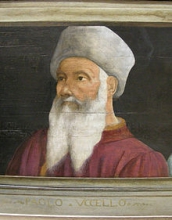 Paolo Uccello (1397 – 10 December 1475), born Paolo di Dono, was an Italian painter and a mathematician who was notable for his pioneering work on visual perspective in art. Giorgio Vasari in his book Lives of the Artists wrote that Uccello was obsessed by his interest in perspective and would stay up all night in his study trying to grasp the exact vanishing point. He used perspective in order to create a feeling of depth in his paintings and not, as his contemporaries, to narrate different or succeeding stories. His best known works are the three paintings representing the battle of San Romano (for a long time these were wrongly entitled the "Battle of Sant' Egidio of 1416").

Paolo worked in the Late Gothic tradition, and emphasized colour and pageantry rather than the Classical realism that other artists were pioneering. His style is best described as idiosyncratic, and he left no school of followers. He has had some influence on twentieth century art (including the New Zealand painter Melvin Day) and literary criticism (e.g., in the "Vies imaginaires" by Marcel Schwob, "Uccello le poil" by Antonin Artaud and "O Mundo Como Ideia" by Bruno Tolentino).